Posted by Jake Parrillo on November 23, 2021
My Fighting Illini football team have done something that I've appreciated this year uniform-wise:  they've stuck with orange.  Orange helmets every game.  Sounds like it is something that Bret Bielema has pushed.  And I'm here for it.  This past weekend in Iowa City, we had a lovely uniform matchup with the Illini going O-W-O.  And the Hawkeyes doing their traditional home B-B-Y.
But, that clearly wasn't the best-looking college football game of the weekend.  Not by a mile.  That honor is held by the UCLA vs. USC game.  Here's a look at the 2nd half kickoff that was happening as I tuned in (The Illini game had just finished up).  Both teams wear their home colors during this game - both at the Colosseum and at the Rose Bowl.  At least that's what I thought happened. 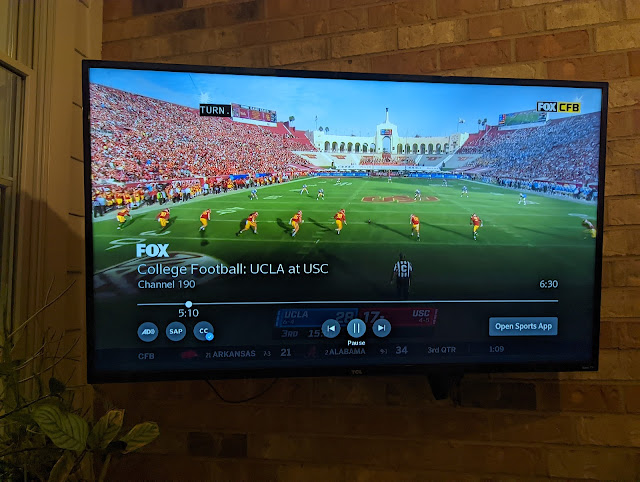 Turns out, there's a bit more history to the story.  According to the OC Register there was a period when it wasn't the calvalcade of colors we see today.  Love this little timeout story:

For decades, USC and UCLA were pitted against each other in their home-color jerseys, a result of sharing the Coliseum as their home stadium. It was, after all, a home game for both teams.

The arrangement was not only popular among alumni and fans, but it served as a defining stylistic feature of the crosstown rivalry to observers across the nation as the uniforms’ contrasting colors glistened in the late autumn sunshine and popped on TV sets.

But soon after the Bruins moved their home games to the Rose Bowl in 1982, new NCAA rules required visiting teams to wear their white jerseys.

For more than two decades, the tradition faded until the Trojans broke the rule in 2008, arriving in Pasadena in cardinal jerseys after former coach Pete Carroll hatched a pre-game agreement with former UCLA coach Rick Neuheisel.

At kickoff, the Trojans were penalized a timeout. Neuheisel responded by voluntarily calling a timeout to even the score in a show of sportsmanship.

The setup has remained since, with the exception of their 2011 meeting in which the Bruins wore all-white alternate uniforms, and is renewed with the 88th edition of the crosstown rivalry on Saturday at the Rose Bowl.