Last Fall, I found a few Green Gem Boxwoods - in late October - that were discounted at the orange Big Box nursery.  I brought them home and planted them in the backyard in the bed on the south fenceline.  They were right in front of a colony of Summer Beauty Ornamental Alliums and are set back from the border by just a little bit.  They were in 1# nursery containers, so they were VERY SMALL.

Having planted them so late, I wasn't sure how they'd handle the Winter.  Fortunately, they survived and were still green come Spring. I included a photo in early Spring that showed these.

How are they doing today?  They've put on a bunch of new, lime-green growth.  See below for a photo showing these doing well in this spot.  You can also see (below) some of the Allium and the 'cracked' Ginko tree on the far right. 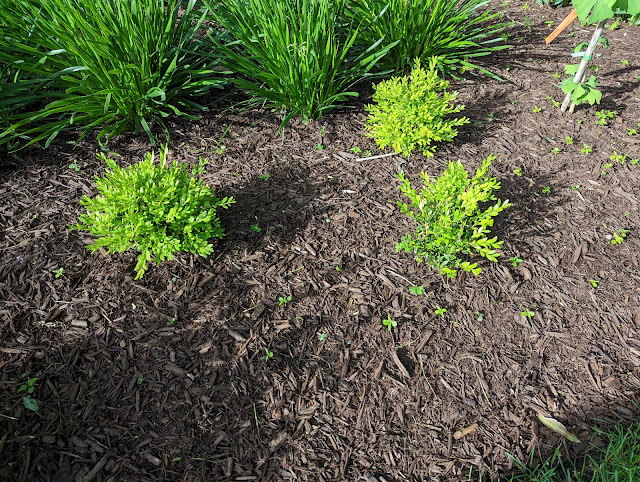 These boxwoods weren't (technically) in the plan, but I was thinking I could use some evergreen structure to the garden - not to mention 'winter interest' to this border that is almost exclusively deciduous shrubs and perennial plants.  These are smaller boxwoods - they get 2' x 2', so they're not going to overtake this bed.

While we were out on vacation in early June, I set up an automatic watering system that covered all of the beds.  I'm pretty sure these were the benefactor of that watering and that's why I'm seeing this new flush of green growth in early Summer.