I mentioned a few days ago that I had begun to empty the compost tumbler and spreading the black gold out in the beds out front as a soil amendment.  Having that tumbler empty means that I can begin to tackle the other two bins.  Below is a photo showing the current state (early September) of the two bins.  Of note, you'll see in the bin on the left AND in the wheelbarrow, I have recently added a big batch of grass clippings and thatch that I removed from our backyard.  Both bins are full up to the top. 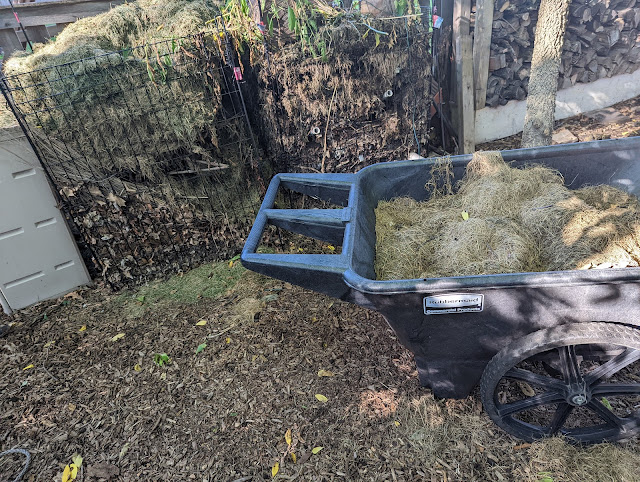 I began to turn these piles by starting to empty the bins.  The bin on the right is a proper mix of greens and browns.  And has passive aeration in it.  The bin on the left was empty up until last Fall when I filled it up with mulched-up leaves.  It was (then) mostly browns.  And now, it is topped with grass - mostly greens.

So, these bins need three things:  first...pulling out of the most-done compost material that I can fill up the tumbler to get a batch of 'finished' material next year.  That is going to come out of the bottom two-thirds of the right bin.  From there, I need to empty out both bins to 'turn' all of the material.  And, finally, I need to mix the browns/greens together to get the right mix.  Then...add in a series of layers of alfalfa cube sludge to speed up the process.

I started to empty the bins and here's how it looks with half of the bin on the right emptied: 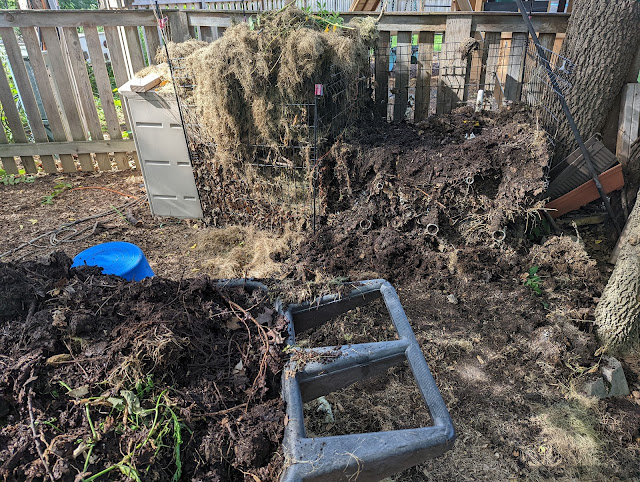 I took this 'top' set of material and put it in our wheelbarrow.  I didn't want this to get buried UNDER all the other stuff as this is the least-broken-down of the material.  Here, below, is that top half in the wheel barrow: 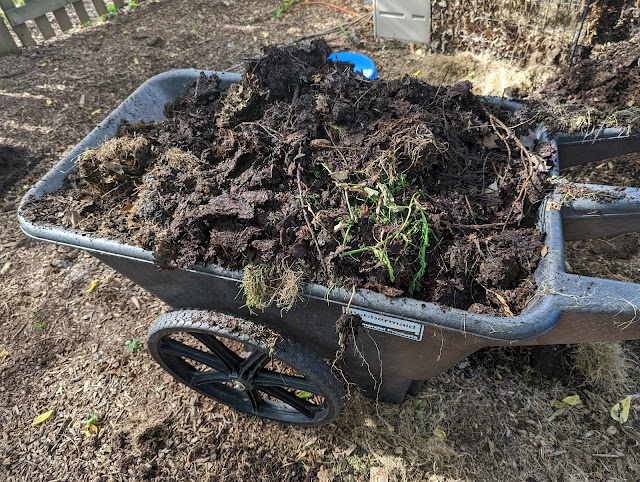 So, what's next?  I have to turn out both of the bins.  Mix everything up.  Put a batch in the tumbler.  Then, pile this back into the right bin with a proper mix.  I'm thinking that I'll be able to get ALL of the current material into just one bin, which would leave me with the left bin for filling of leaves this Fall.
Now that I have the grass project (mostly) done, I can get this seasonal project off my to-do list.  Then, I can move on to dividing perennials.  I'll post some photos of the finished bins in the coming days/weeks.
2022 to-do list backyard compost compost bins compost gardening compost tumbler composting seasonal projects turning compost
Location: Downers Grove, IL, USA