Last week, I shared the sweet deal I found at the Orange Big Box nursery on six small Autumn Ferns and talked about how they are/were on my plant 'want list' because of how well they've performed in our backyard the past two growing seasons.  The three that I have are standouts and are what I'd call semi-evergreen as they last WELL PAST the first frost.  That four-season aspect is a big part of what I'm drawn to with the Autumn Fern.  And...the fact that it doesn't look ratty after the long, hot Summer.

One of the aspects of our garden that I've continued to work on is the notion of repetition.  Garden design that works (for me), very often includes a repeating set of plants in different locations to help pull the whole thing together.  I have started on my repetition journey with Karl Foerster Feather Reed Grasses and Hicks Yews.  I'd like to keep adding Autumn Ferns in different spots to begin to show a repeated glimpse of these four-season ferns.

Because of that, I decided to plant the six new Autumn Ferns (they're small ones, remember) in two different colonies of three.  In two new spots.  First, on the north side border, amongst the zig-zag grouping of hostas was a little nook that all three fit in right near the lawn: 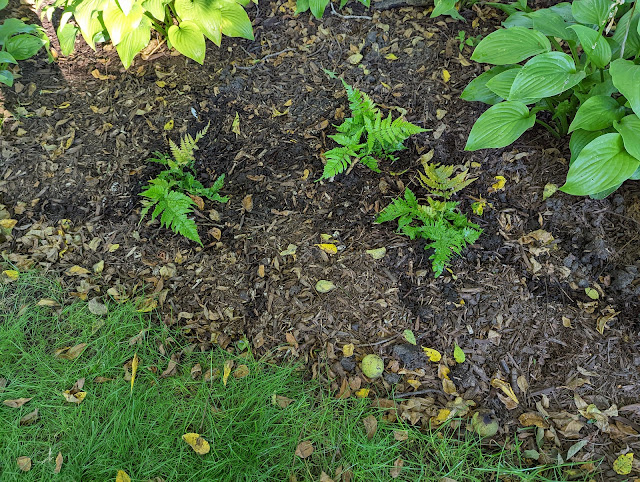 And the second spot is on the southside, west of the gate, between the Oak tree and the firepit.  Along the linear border.  This was Priority Spot #1 from 2021 that calls for a dozen Ostrich Ferns.  I planted NONE - because we added the firepit last year.  So, these now can start to fill in this border next season: 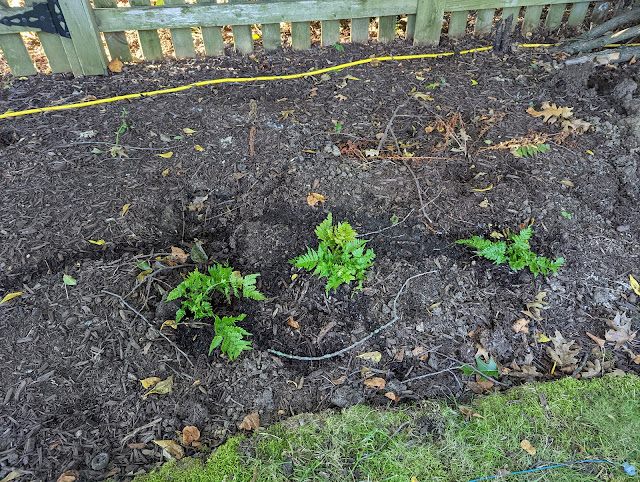 I'm going to pop into a few Orange Big Box nurseries in the next week or two to see if I can find even more of these on sale.  They'd fit just about ANYWHERE back there.