Posted by Jake Parrillo on February 11, 2010
Not to be confused with New Belgium Brewing in Colorado, New Holland Brewing is a rapidly expanding Western Michigan brewing outfit based in Holland Michigan.  Home to more than 15 original brews including 4 year-around beers.  It seems that they've recently ventured out into the "spirits" business with a vodka, gin, rum and whiskey.  Quite the alcoholic empire.

Nat and I had never been to Holland - we're St. Joe's and South Haven folks with an occasional trip to Saugatuck.  So last week, during our time off, we ventured up 196 to check out Holland and the New Holland Brewing Company.

We walked in (with our baby seat in tow), and I was immediately struck by all the pizzas being consumed in the place.  Based on the Yelp reviews, I was expecting pub fare.  Spying our babyseat in tow and knowing we'd most likely have a screaming baby, they dragged us all the way to the back room - upstairs in fact - instead of sitting in the main dining room/bar.  That, alone, may have soured me and my review of their food. 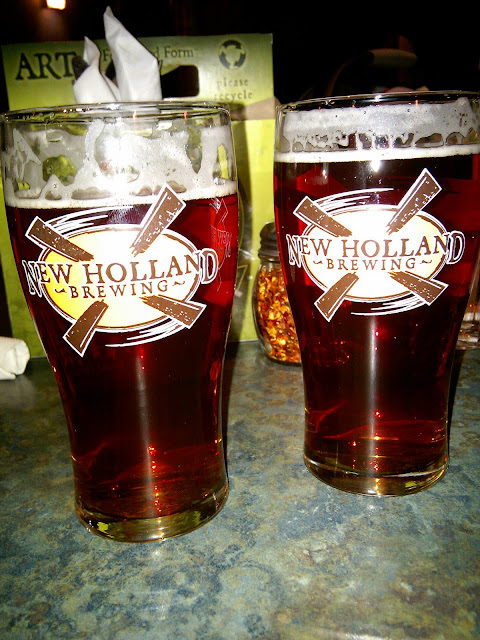 Turns out...I probably should have ordered a pie.  I got cute and ordered the "Don-O-Might" - an italian sandwich which was disappointing, mostly because it lacked any sort of heat in any way.  Nat didn't love what she ordered either.  It was so unmemorable that I can't even remember what she ate!

But...we did like the beer and I suppose that is the point.

We didn't get a lot of time to walk around the charming town to see things and for Nat to shop, so we will be back when the weather warms up.  When we do, we'll probably stop into the New Holland Brewing Company, but we'll only order beers and a few appetizers.
daily dining out michigan