Posted by Jake Parrillo on February 17, 2010
As I've mentioned before, I'm not the baker in the house - Nat (when she has time) enjoys it more than I do.  Her mom shared a recipe for "Red Velvet" cupcakes late last year and much to our chagrin - it called for numerous bottles of red food coloring.  We walked down to the Jewels (yes...I said "Jewels".) and plunked down $4 a piece for the little bottle of McCormick's coloring and went on our way - knowing that had to be a better way.
Fast forward a few weeks and we found ourselves in Schweppe's on North Avenue near our house.  Schweppe's is a kitchen-supply shop featuring industrial supplies for commercial applications.  They allow the public in - and charge us a bit more than their restaurant customers - but it is still very cheap!
They have everything there from spatulas to snow-cone machines to industrial-sized containers of ketchup.  They also happen to have big bottles of Evon's "Red Color" syrup.  It's about $4 for the entire quart bottle - about the same price the Jewels charge for 2 oz.  We were skeptical - but bought it anyway.  We'd been duped by other red food colorings before - charging little for a lot - and if we deviated from using the McCormick's brand, Nat was always disappointed in the results. 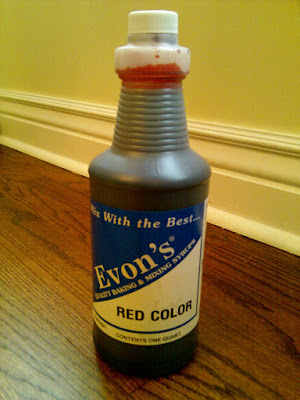 She finally used this stuff and - wow - it was perfect.  She tells me it was even better than the McCormicks stuff - produced great red velvet cupcakes.    Schweppe's is close, so for those of you who bake red velvet cakes, let me know and I'll pick you up a bottle!
I can't speak much for the color - it looked fine - but I can speak for the taste.  They were gooooood!
baking cooking daily