Posted by Jake Parrillo on December 07, 2010
I was tipped off by my brother-in-law Equation Boy/Man about a house near ours that had put up a curious set of holiday decorations.  He told me, "I thought you'd get a kick out of seeing this."  Equation Boy/Man gave the coordinates - it is on Willow Street, just north of First Street.  For those of you unfamiliar with the street names in Elmhurst, but know a few landmarks, this house is just North of the tracks and 4-5 blocks east of York Street.

Nat and I were out last night and we decided to drive by.  Sure enough, they're cast aside the traditional holiday decor and lights and instead have just a sign and a simple aluminum pole in their front yard.  Although my photo isn't great, the sign reads:  "A Festivus for the Rest of Us!" and you can see the pole to the left of the photo standing up and proud in the middle of the yard.  Looks great all lit up at night. 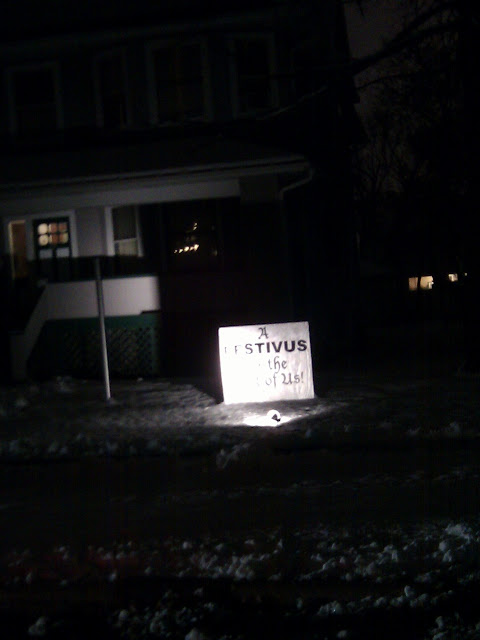 Clearly, this is a single dude living here, right?  There's no way anyone's wife would go along with this -albeit very funny gag - right?  Anyone know who lives in the Festivus House?  Are they having a big get together on the 23rd?  Feats of Strength?
downtown elmhurst elmhurst holidays