Posted by Jake Parrillo on December 30, 2010
My brother-in-laws are a pretty creative bunch.  For the past few years, they've been building gingerbread houses over their Christmas breaks.  Last year it was a pretty intricate log cabin house with a front porch.   This year, all three of them (Bill, Charlie, and Peter) had time together and spent quite a bit of time making a different kind of "house".  I use "house" in quotes because for some reason  they actually made a combination KFC/Taco Bell with a drive-thru lane.   Yes.  A restaurant.  I watched (I had NOTHING to do with this aside from watching and cheering them on!) as they baked the walls/structure and poured the sugar "glass" windows.  I came back a few days later and this beauty was built.  On the right, you can see the drive-thru's menu board and also note the wire(s) going to the bottom of the structure.  They even wired this restaurant up with interior lights.  And...to be even more crazy:  There's even an air conditioning unit on the roof!  Pretty unreal. 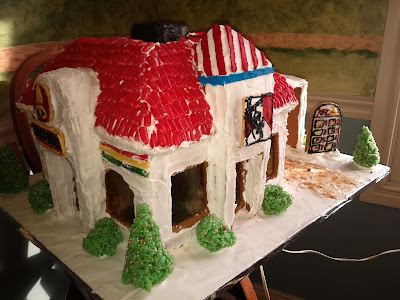 Pretty incredible, right?  They even tried to get KFC or Taco Bell's attention - but to no avail.  They tweeted it to both the Colonel and to Taco Bell.  You'd think that their social folks would be ALL over this, no?  The funny part to me is that they're NOT fanboys of the restaurants/food.  They're just funny dudes.  Check out the tweet they sent to the Colonel.  How does he not respond to that?!?!?

charliefmoran
charliefmoran
I have no idea what the three of them will do for a Gingerbread house next year, but, I'm certain it'll be pretty great.
christmas family holidays