Posted by Jake Parrillo on February 26, 2011
Last week, Google announced a new tool called Oscar Trends - which is the second vertical-ized view of our trend data with the first being Flu Trends.

Granted, I "drink the Google Kool-Aid" and think that Google data is compelling on any subject, but by combining the geek/chic pieces of Google+Oscars, I think we have a winner.  For a full sense of the project, let take a look at the research - which is based on past year's trends and eventual winners.  Check out this interesting set of examples from the past three years.  Each winner saw a surge in queries BOTH when they were announced as a finalist and leading up to the actual ceremony. 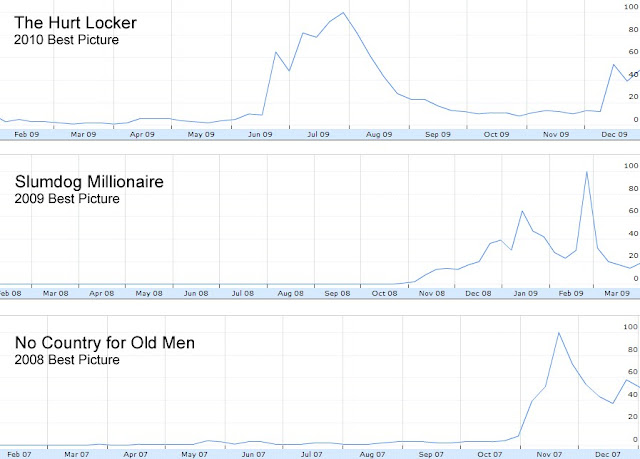 Each year, as you would expect, Google sees a flood of searches around the movies, actors, and film industry as the Oscar broadcast comes closer.  People want to see the movies in person, they want to learn more about them, and they also want to see what their friends and others are saying about them.  They turn to Google for all of those.  And...based on the trends, this year was no different.

But...the REAL QUESTION is whether: Is this data "smart" enough to actually predict the winners?  Who knows, but like you, I'll be watching - but this time I'll be armed with Google's data.  Here they are to keep track at home.

For bloggers like me, Google has taken this one step further this year by sharing this little widget - which I've embedded below.  Pretty slick!