Posted by Jake Parrillo on April 20, 2011
It has only taken a little over two years, but I think we've found it:  the place to get our pizza pies in Elmhurst.  For the most part, our go-to takeout place has been Mama Maria's - on Valette Street, just off of York on the south side of town.  It is a good, solid pizza place with a great staff.  The pies they churn out are very consistent, but not spectacular.  Unfortunately for them, I think I've picked up my last pizza pie from their store for a while.

(Equation Boy/Man turned me on to Mama Maria's.  His old go-to place is called Billy's Pizza Dugout in Villa Park, but there's been an ownership change and he didn't like the changes the new guy made.)

All of that is behind us now, because went to County Inn Pizza last night and they've converted me. I consider myself pretty well-versed in all things pizza, but embarrassingly the lead for this place came from my lovely wife Natalie.  Seems, one of our neighbors picks up their pizza from here regularly and raved about it.  She couldn't quite remember the name of the place nor the exact location, but remembered it was on the "edge" of Elmhurst.  On a few occasions, we've driven up and down Butterfield and St. Charles Road trying to run into the place, but with no luck.  For some reason, Nat had her Yelp app opened on her phone when we were talking about dinner last night and County Inn Pizza's Yelp page showed up.  I'm glad it did!

County Inn is a pizza stand.  Literally.  They added a little shelter, but you can tell that it was started as a stand with a window where you can order your pizzas from.   That white door on the right leads you to the counter.  There's that odd Pepsi machine out front - which is weird.  They have stacks of 2 liters inside, too.  All Pepsi products - which is the only black mark on this place.  The stand is located just on the other (non-Elmhurst) side of 294 on Roosevelt Road.  They bill it as being 1/2 mile east of York Road and 1/2 mile west of Wolf Road. 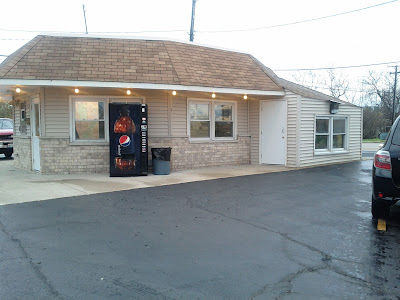 We pulled up and I got out to see how long it would take to cook ours.  The guy said 12 minutes.   We ordered a medium pie and waited.  12 minutes later, I was in my car rushing home.  All three of us (Nat, the Babe, and myself) scarfed down the entire thing in record time.

Turns out, they're known for something called a double decker pizza - with 2 thin crusts stacked on top of each other.   I guess we'll have to test that one out next weekend!
daily dining out elmhurst pizza