Posted by Jake Parrillo on April 05, 2011
After weeks and months of campaigning, it all comes down to the voters in Elmhurst.  I've been actively supporting my neighbor and friend Dannee Polomsky in her bid to represent our  neighborhood on the City Council.  She's done everything she could in the campaign and more importantly, she did everything the right way.  Win or loose, she's going to be able to hold her head high around town - and that's just as important as anything else in politics.  I've been on the ballot three times.  Once as a Park District Commissioner, and two times as a Village Trustee (and like four times as a Precinct Committeeman, too), so I know what is going through the candidates heads.  Too often we loose sight of that, but tomorrow morning, one of the candidates is going to wake up a winner and the other is going to roll over, see the alarm clock and have to deal with loosing.  If you do the right things during the campaign, that Wednesday after the election isn't so bad.

Our neighborhood is energized and we'll be voting in mass for Dannee today.  Nat and I are going to go take the Babe to vote for the third time (her first time voting is here, second here) later this morning and we'll know quickly - based on the number of voter we are - how the election is going.  Our polling place needs to turn out in big numbers - so if you are in Elmhurst:  GO VOTE FOR DANNEE NOW! 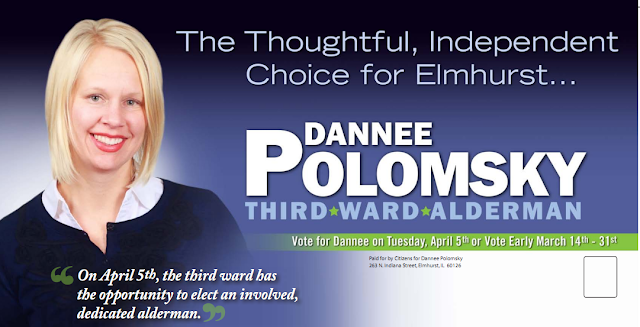 She has a plan for the neighborhood, is willing to listen to our concerns and notably:  she's been endorsed by ElmhurstStinks.com!
daily downtown elmhurst elections Elmhurst City Centre