Posted by Jake Parrillo on May 07, 2011
When I was running errands this morning, I spotted on Twitter a few folks talking about today being Free Comic Book Day - which turns out to be the first Saturday in May every year.  Fortunately for me, there's a place called GEM Comics in Elmhurst which is located just a few doors down from our dry cleaners.  Nat had asked me to stop at the cleaners to pick something up, so I figured I would stop by GEM Comics and pick up the free comic book. 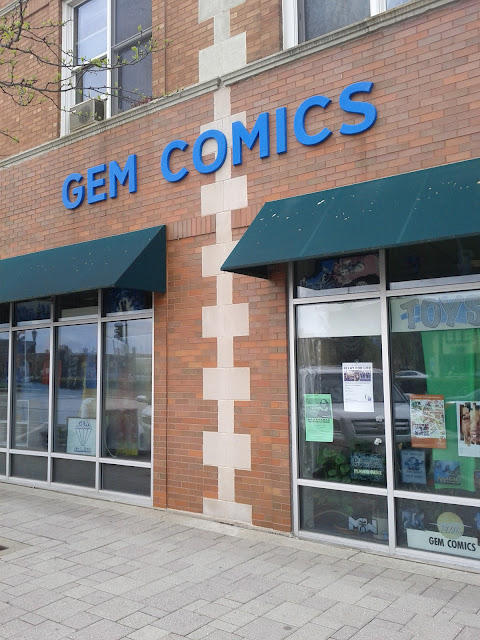 First thing I did when I walked in was ask "Today is Free Comic Book Day, right?"

The older lady at the counter said, "Well...it isn't free for me, so I decided to pass on it."

Hmmm....out the door I went.  Bummer.  This is the local comic book store in Downtown Elmhurst.  I want a reason to shop there.   I am after a birthday present for my nephew and figured I would find something cool at the store, but when she rained on my parade, I couldn't muster up the attitude to dig through their store.

I understand that giving away comic books isn't free but I'm thinking that the benefits of doing so far outweigh the costs in some way.  I know when the Babe is old enough to read them, we'll go find a comic book store on the first Saturday of May in 2015 or something and maybe, just maybe, they'll hook her and that store will have a customer for life.  I know we won't be trying that experiment at GEM Comics in Elmhurst.
daily downtown elmhurst elmhurst Elmhurst City Centre shoppping