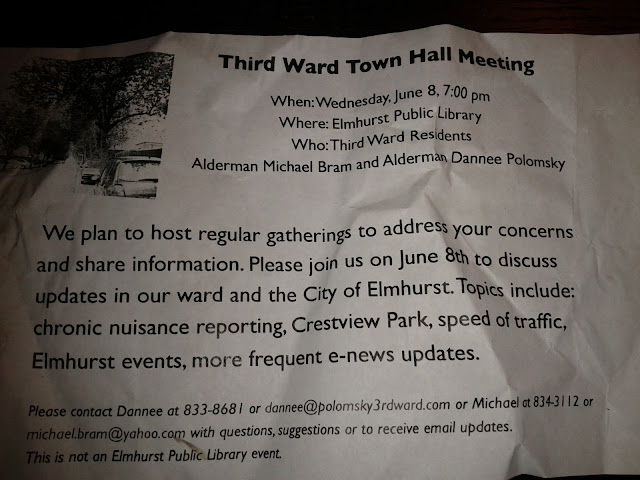 Tonight at the Elmhurst Public Library, our two Alderman - Dannee Polomsky and Michael Bram are hosting their first (of what they say will be a series) of joint Townhall meetings.  They're taking this pretty seriously and even walked flyers around door-to-door to drum up attendees.  That's the flyer (above) that was on our front door this morning.  Good idea.

Alderman Bram has hosted one of these before, but with the recent election of Alderman Polomsky (yeah!), they're teamed up together.  That partnership is a great thing for our Ward - and they both have different tools they bring to us residents and will complement each other.

Polomsky aims to be the 'Great Communicator' and will make sure every resident feels more plugged into their local government than ever before.  She's perfectly suited for this role and has made communication the hallmark of her term.  With City government being the "closest" form of government to us residents, the communication plan Polomsky is undertaking promises to have a HUGE impact on our quality of life and level of understanding in government.

Bram, who is up for election in just two short years, is a budget hawk and is meticulous with the details of City government who makes sure every decision made - no matter how small - is the right one for the city.   He does his homework and speaks up for the 3rd Ward even when it may not be the most popular decision in the City Council chambers.

Together, they're going to be a great team for the 3rd Ward.   I am looking forward to hearing more from both of our Alderman - and I'm planning on attending tonight.

The information for the townhall tonight is:

Tonight's meeting has no formal agenda, but rather will be open to a discussion of various topics that are going on within the City of Elmhurst as well as issues that  are specific and have impact on the Third Ward.

If you aren't sure if you live in the 3rd Ward in Elmhurst, check out this map below.  I made it using the "my map" feature on Google Maps.


View Elmhurst 3rd Ward in a larger map
If you can't make it, but want to stay in touch, you should email the Aldermen and have them add your contact to their list.  The note they sent out said "Our Third Ward e-newsletters/bulletins will be sent from this email address: ThirdWardNews@gmail.com ".
daily downtown elmhurst elmhurst elmhurst city center IL Politics