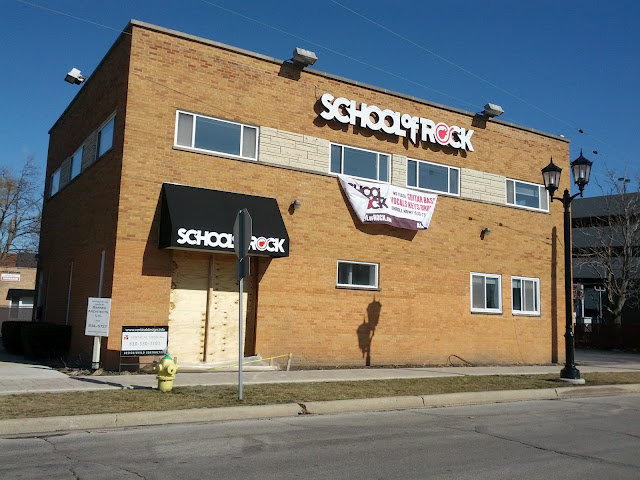 As I was driving across the railroad tracks this weekend I saw the signs had gone up on the new School of Rock building right on First Street.  Technically, the address is 105 N. Maple Street, but the building's signage is all facing the more public First Street side.    Either way, it is just a block or two from the main core of Downtown Elmhurst, so I consider this a welcome addition.

From their site, School of Rock (cute name, btw) is clearly aimed at kids so that means that plenty of moms and dads will be dropping their kids off with an hour to burn.  This is exactly the type of business that we should be luring to the Downtown.    There likely isn't going to be a ton of retail sales (maybe some?  Like guitar strings or drum sticks and what not), so it won't be material to the city's revenues, but like an office that has employees that go out to lunch, the benefits are tangential.

As for the building, I think I remember it being home to a contractor (Hansel & Hempel) so I'm hoping that they just relocated to a different location.  It isn't that welcoming from the front and the door is on the wrong side, I think.  I believe the parking lot is over there to the right side of the photo. The minimal windows aren't pretty, but perhaps it lends itself well to music classrooms?  One thing I noted when I drove by is that in the window just to the right of the main entrance there's a 'high' window.  From my glance, it appeared that they've erected a 2X4 stud wall right in the middle of the window - meaning that a room might divide the window?  That's weird, but retrofitting a music business into an old building can't be easy.
daily downtown elmhurst elmhurst elmhurst city center Elmhurst City Centre