Over the weekend, we hit up the Oak Brook Costco and came across this behemoth.  This is the Suncast Wood and Resin Playcenter - Costco Part #588674.  It is priced at $1299.99 (see the bottom photo for pricing details).

This is the 2012 version of the VERY popular Costco backyard playground/playset series.  Last year, they featured the Cedar Summit Panorama - which we brought home.  This year, they've gone with the Suncast Wood and Resin Playcenter which has many of the same features as years pasts.

***Update on 2/28/12 - If you are looking for the Cedar Summit Mountainview Resort Playset you can find the details here.  Turns out Costco is indeed selling a Cedar Summit swingset, but just not in Texas or the Midwest.  ***

The 2012 Suncast structure is made up of both wood and a lot of plastic parts - unlike the Cedar Summit.  There are certainly plastic elements in the Cedar Summit version, but they're mostly highlight/enhancement pieces like window frames.  The Suncast playset has a full plastic climbing wall,  a really nice (gently arched) plastic ladder (which is nicer than the Cedar Summit one and clearly more toddler/kid friendly), and even a series of plastic (or resin as they call it) walls.

The slide isn't set up on this one in the store, but it is billed as being 'configurable', so you can put the slide, ladder, and climbing wall in any one of three spots.  That's a nice feature.  It doesn't appear that the swing support arm can be configured in the same way, rather just like on the Cedar Summit one from 2011, it is anchored and only changeable through a hard hack.

There's three swings and a really weird suport structure for the swing arm.  Our local Costco appears to have rigged it up with a treated lumber 4X4 (you can see it in the photo below), and has some weak-looking support legs.  They're just 2X4's and the 2 pieces that connect with the ground look like fence planks are are thin.  Not sure if that's the way it is sold or if the Oak Brook Costco employee tasked with building this took some liberties.

I'm (obviously) biased because I bought the playset last year, but I'm pleased with that decision.  While I think this one is nice, it is priced the same but has much more of a plastic look than ours.  The plastic roof especially stands out and a bit jarring to the eye.  This doesn't appear to be able to blend in with the natural settings of many backyards as the past editions have.

Being Costco, I'm guessing that they fully vetted this vendor and they'll stand behind it, so if you are in the market for a playset, you can buy with confidence. 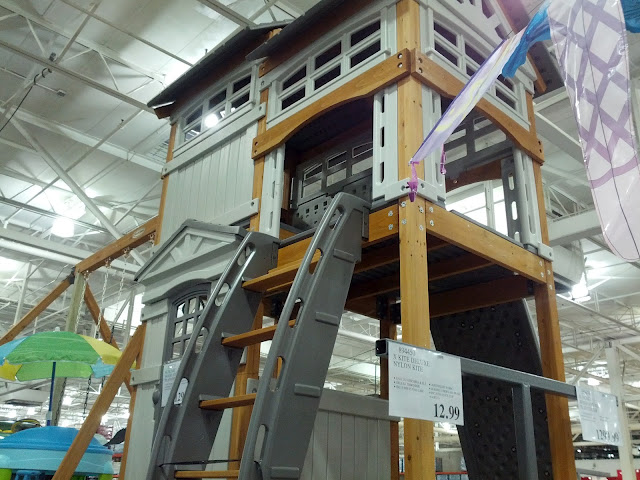 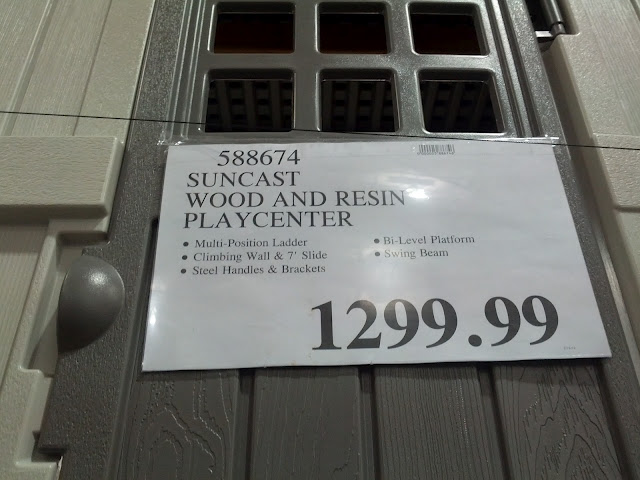