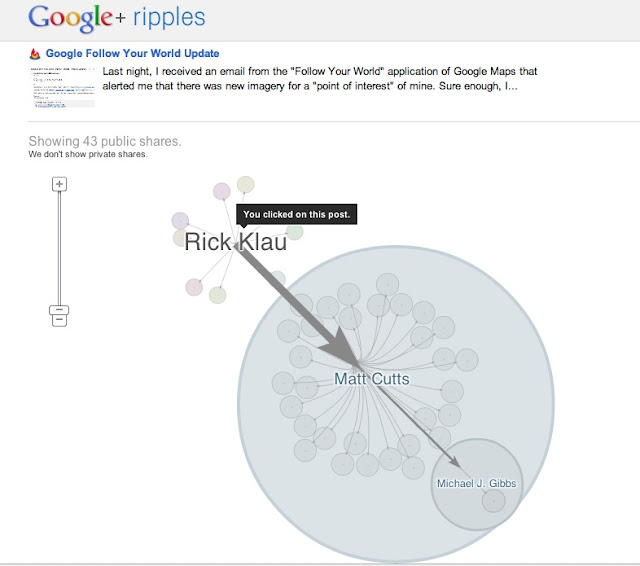 Last week, I put up a post that pointed to a neat little tool called "Follow Your World" from Google that allows you to put in any location of interest (say...your home address) and then have Google send you a quick note when they update the imagery of your house on Google Maps.  My old boss, Rick Klau is still one of the true believers and reads this blog in his feed reader (Thanks, Rick!).  He used the baked-in Google+ sharing tools in Google Reader (at least...that is my assumption) to share my post with his audience on Google+.   Rick has more than 40K folks who follow him, so his content is seen by a big - and in some cases - an influential audience in the tech, startup and politics world(s).

Google+ has this neat feature called "Ripples" that shows you what happens in a graphical manner in terms of the sharing of content.  That image above shows the path that my post took once Rick shared it.  One of his readers (Matt Cutts) has an *even bigger* audience than Rick and once he re-shared it, the audience grew even bigger.

Neat stuff, and the implications on what the Ripples tool does in terms of visualizing the way content moves around the web are significant.  The post, while NOT the most viewed post of the month on this blog, is right up there in the top few.  It serves as a nice reminder that creating helpful tips/content that people find value in will find audiences if you allow the story to be what I'll call "socially aware" or "socially ready" - meaning that it can be shared in the right way, simply.

(Note:  I work at Google in Communications and Public Affairs.  You guys know that, right?  I didn't have anything to do with Ripples or the creation of Google+, though!)
daily google social technology

Weeping White Spruce - Acquired But Not Planted (Yet)

I first came across a Weeping White Spruce tree via Laura @ Garden Answer on Youtube .  I've embedded her video below and have set it to start at 1:03 mark in the video where she talks about how they picked this tree out.  In particular, she talks about how we're not supposed to judge an evergreen by what it looks like as a 'baby tree'.    The Weeping White Spruce is a columnar evergreen and it is a weeping tree.  By now, you guys know I love columnar varieties of trees and are drawn to those because it means that I can pack more trees into the yard as they grow.   The first weeping conifer that I bought was last year was the Weeping Himalayan Cedar Tree that I planted about a year ago .  Earlier this month, I posted my concern for the tree as it had suddenly turned brown, but the good news is that it seems it has recovered and there is new, green growth all over the place .    I also added six ( but just three of them planted so far) Canadian Hemlocks to br
Read more