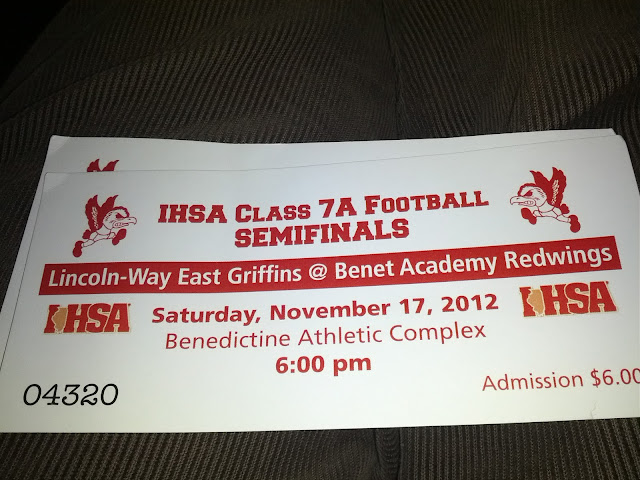 Last night, Nat and I dropped the girls off at her folks house and (after Vest Fest) went to Benedictine University to see the IHSA Class 7A Football Semifinals between the Benet Academy Redwings and the Lincoln-Way East Griffins.

Nat is a *very* proud Benet Alum.  And, I went to Lincoln-Way.  Long story, but I consider myself a "Lincoln-Way Central Knight", but I went to school at Lincoln-Way East for 2 years (fresh/soph) and Central for 2 years (junior/senior).  They had both campuses built when I was a student there, but there was *just* one school - called Lincoln-Way.

So, it is with mixed-emotions that I root for the Griffins.  While in my heart, I'm a Knight (graduated from the Central building, played football on the field at Central and have my photo up on the wall at Central), I have some connection to East.

And...those of you who follow high school football know that while Central hasn't made a lot of hay in the past decade or so, East has emerged as a perennial power and contends every year.

So, we found ourselves rooting for our schools on Saturday night.

Unfortunately for Nat, it was a route.  We got there late and by the time we found seats, the score was 31 to 7 in favor of Lincoln-Way East.  Benet was just over-matched.  They had a heckuva run and a big turn-around from last year.  In 2011, they went 1-8.  This year they were 10-1.  Now 10-2.  Pretty remarkable and with a sophomore quarterback, they'll be back next year.    I've long dismissed Benet athletics as being 'small potatoes' but as the past few years in hoops, softball and football have shown me, they have strong programs and Nat (as usual) was/is right!

Hey...at least Nat got to enjoy the hot pretzel, eh? 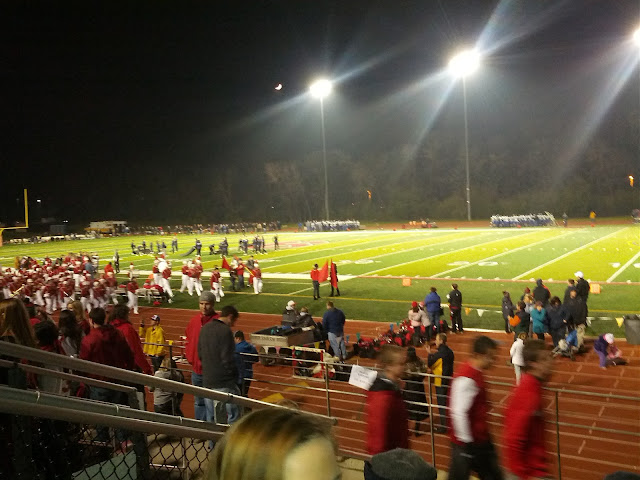