Posted by Jake Parrillo on January 30, 2013
This week I received an email in my inbox from Speaker John Boehner asking me to fill out his 2013 "Speaker's Survey" on his TeamBoehner.com site.   The survey asks for your name, email and zip code, but doesn't ask for street address.

After the election, the team at OFA put out a similar survey for 'supporters' that asked questions mostly focusing on ones interactions with the campaign.

In thinking through these surveys for political organizations, they're really great trojan horses in terms of building a profile and layering data on top of said profile in a quick way.  I'd think that these are mostly filled out by the die-hards.  The dyed-in-the-wool political operative/foot solider type.

And that's a great place to start.  Wouldn't the Speaker's office know who exactly on their email list support the Keystone Pipeline?  They'd love to be able to activate/engage those folks on a moment's notice and this survey will get them closer to building that list.  (You can see some of the survey in the photo below.)

But...I think the real trick here is to figure out a way to broaden the survey's appeal - outside of political ranks.  Maybe some sort of stand-alone site that speaks to the future of a state (Illinois in my case) that has some paid media behind it to drive responses?  I'd think that there would have to be some incentive to filling it out, too?  Maybe give away a few nice trinkets?

Something interesting to explore as the primary season heats up here in Illinois.  I'd think we'll see some surveying going on as the candidates start to build up their own profile sets of voters in Illinois. 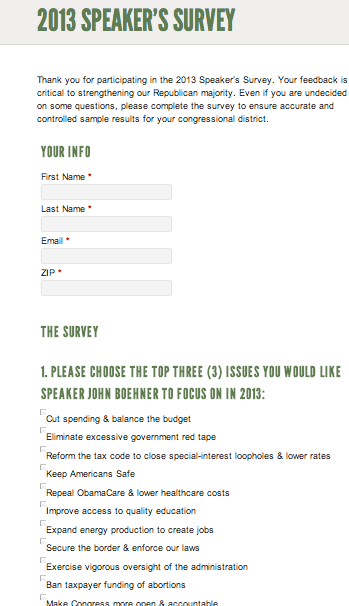