Our Christmas Decorations Packed Up - January 2015 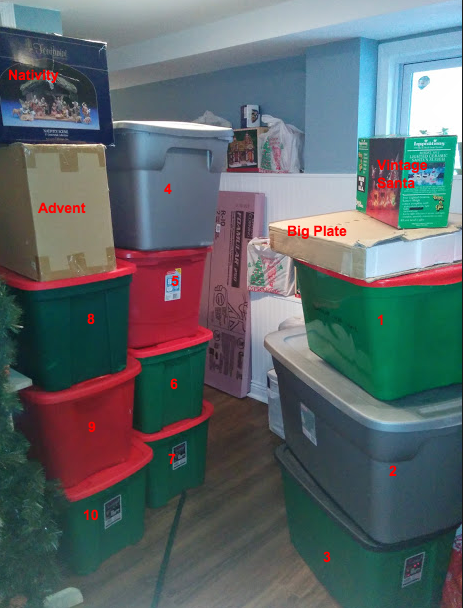 Just placing this photo here as a reminder to myself this fall when I try to drag all the Christmas stuff out of our crawlspace.  This year, I put away 10 tubs, the advent box, the nativity box and 2 other small boxes on the top right.   Now I'll have a reference photo to understand if I have everything out for the 2015 Christmas season.

The reason for this is that this fall, I pulled out ALL of the tubs that had *some* Christmas stuff in them.  There was like 22 tubs total.  Lots of them were half filled with stuff and a bunch of them had things in the bottom of the tubs that we stopped using at Christmas (like old lights, plastic ornaments, old tree skirts, etc).

This year, when re-packing our stuff up in January, I consolidated everything into these slightly smaller tubs.  (That was the other problem...last year, we were using lots of big tubs - you know the kind - the ones that you have to spread your arms really far apart to carry them).  These are easy to handle, can't get packed with a lot of stuff and therefore can't get too heavy.

One side note:  this doesn't include the stuff we used outside the house like garland, inflatables, and candy-cane lane.

(And...yes...this is a TON of Christmas stuff.  And...yes we have a very small house.  Don't judge us. )
2015 resolution christmas christmas decor crawlspace everygoddamdamnday