Posted by Jake Parrillo on February 27, 2015
That's what the folks at Little Caesar's are touting this week. A pizza 'encased' in bacon. 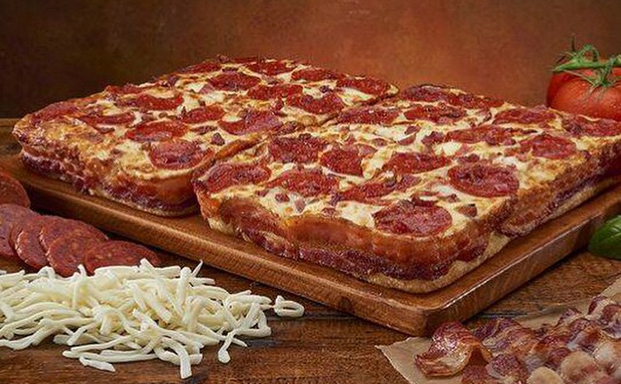 From the looks of it, they've topped the pie with even more bacon and pepperoni.  I make a Detroit-style sausage/pepperoni (or soppressata).  And...I really like the 'meat lovers' pie from Home Run Inn (the restaurant version more than the frozen version).

So, it seems that this is something I should be trying to make, right?  I typically employ a two cheese process on my Detroit-style pizzas.  And...I do a cold rise with the skins.  I wonder when you put the bacon in?  Maybe you take the raw bacon and weld it to the side of the pans and allow the dough - which when started is almost like pancake batter - kind of 'grow out' to the sides and get to the bacon?  What about the charred/carmelized cheese that normally graces the sides of these pies?  You know the kind...like at Peaquod's/Burt's?  Does the bacon eliminate that?  Guessing it might?

Nothing I like better than a good pizza experiment, though.  I'll give it a shot.  Will report back.
2015 resolution everygoddamdamnday pizza pizza making