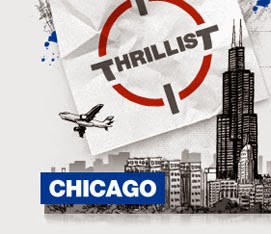 Over on Thrillist, you'll find the list of some of the best pizzas in Illinois.  They include a few from Chicago (Pequods, Coalfire, Vito & Nick's) and a bunch from around the State including Papa Dels down in Champaign.  We've been to quite a few places listed already, but Vito & Nick's - thus far - has alluded me.

One of Nat's favorites - Burt's Place - is also on the list.  Here's what they had to say about that place:


No pizza roundup would be complete without mention of the legendary Burt of Burt’s Place. While it may not be famous for its service, Burt’s is famous for its massive pan-baked pizzas with a perfect balance of ingredients served in a crazy lodge-style environment. Pro tip: Burt is something of a celebrity around these parts, so best to call your order in ahead.

Outside of Papa Dels in Champaign, I'm a little skeptical of a lot of those downstate places.  The whole 'shrimp' or 'taco' pizza doesn't do much for me.