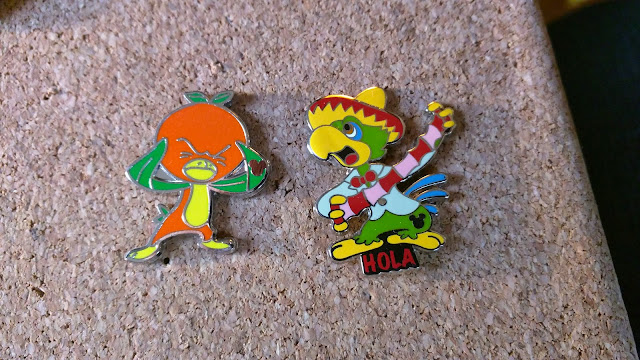 These two birds are hanging out together on The Babe's Disney pin board.  They're both 'Hidden Mickeys'.  She arranges the board to build little 'collections' and because these guys were about the same size and both birds, of course, they'd go together, right?

The guy on the left is "Orange Bird" is a guy you see around the area where they sell Dole Whips in Adventureland and he appears to have a very fervent fan base/following.  I didn't know the history of him, but it turns out, Disney created this creature for the Florida Citrus growers.  From DisneyWiki:


The Orange Bird was created in 1970 as a mascot for the Florida Citrus Commission in exchange for them sponsoring the Tiki Room attraction at Magic Kingdom.

Accompanied by singer Anita Bryant, the two appeared in ads for Florida oranges and Bryant narrated a record album telling the character's story. After the Anita Bryant ad campaign was dropped in the late 70s, the Orange Bird had a solo career and appeared in a few educational shorts in the 1980s such as Foods and Fun: A Nutrition Adventure and The Orange Bird and the Nutrition Bandwagon. Eventually, the bird would fade into obscurity when Disney and the FCC severed their ties in 1987.

Years later, at Tokyo Disneyland in 2004, the Orange Bird would experience a revival as the Japanese became infatuated with the character and the character received a lot of merchandising to coincide with Japan's annual Orange Day on April 14th of that year. The Orange Bird soon returned to appearing regularly on merchandise in the US as well.

Eventually, on April 17, 2012, the Orange Bird made a proper return to the Sunshine Tree Terrace.

The other pin is Jose Carioca from the Three Caballeros.  It is part of a "Its's A Small World" set, which was news to me.  There are more of these?   I think we have a hunt on our hands next time we go to the Parks .  From PinPics:


2014 Hidden Mickey Cast Lanyard Series - "It's A Small World" collection pin features Jose Carioca, from the Three Caballeros, with the Spanish word for hello "Hola". Jose is playing a concertina. A silver Hidden Mickey icon is on the Small World character. This pin is part of both the 2014 Walt Disney World Resort and Disneyland Resort Hidden Mickey Series.