Our Ostrich Ferns Curling Up In 2015 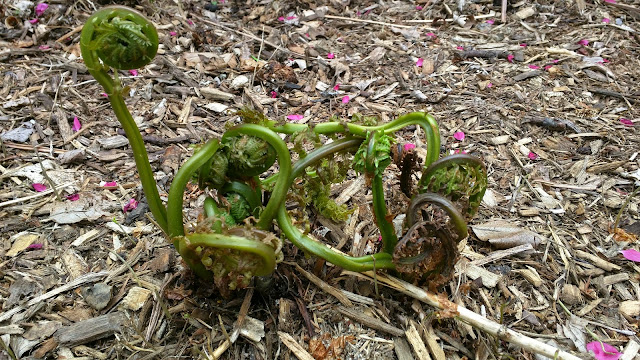 Here's a look at one of the masses of Ostrich Ferns that are curling up and through the mulch.  They're finally and firmly established in their new spot in the beds.

Here's what they looked like in 2013.  And this photo from 2012 shows how many of them there were/are when you pull back.

These have quickly turned into my favorite plant in the entire yard/garden.  They started out with a leftover fern in the far back corner of our yard that I *think* crept over from our neighbor's yard.  He has some ferns over there, so I'm not sure which sprouted which.  Ours gave him his.  Or his gave us ours?

Either way, I took one of the ferns from the back corner and transplanted it in the middle part of our beds.  They've quickly flourished there.  So much so, that I was able to split a few of the heads of these guys and added them to the north side of our yard and even gave a few to my mother-in-law.

Here's some of my post from 2012 that talks about what a nice surprise the ferns were:


When we bought our hose, the wicked old lady who owned it before us, dug up all of her plants and took them with her when she left. I wasn't happy at the time as there were quite a few peonies and hostas that were mature and we saw during our inspection. But, thinking back, that harvesting of her plants turned out to be a good thing. We basically got to start over. We re-dug and edged new beds. We put down mulch where there wasn't any mulch. And, we planted new stuff that *we* liked (and....that was usually on sale at Menards or Home Depot.)

But, in the back corner of our lot, right next to our neighbor's compost pile popped out a few little Ostrich Ferns. Aha! The mean old lady didn't get *everything* from her yard and left behind (at least) a few of these little ferns.

We're going to have think long and hard about how to split these up later this summer/fall so we can plan ahead for the future.
2015 resolution everygoddamdamnday ferns garden gardening landscape landscaping ostrich ferns shade gardens