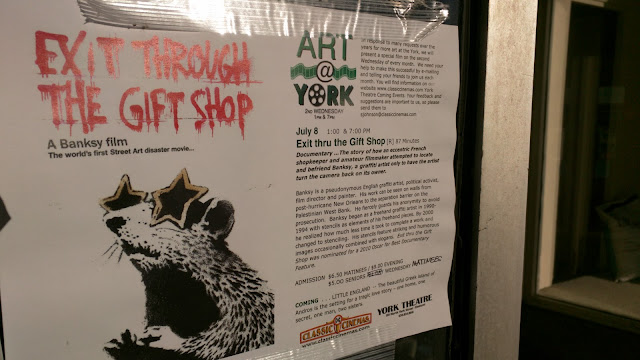 On my walk to the train this morning, I spotted this poster plastered up on one of windows of a downtown business in Elmhurst advertising a screening of a Banksy film called "Exit through the Gift Shop" at the York Theatre in the Elmhurst City Centre.  On the Classic Cimemas' site, they have a page set up talking about the event.  They're planning a series of these art shows with this first one screening on Wednesday, July 8th at 1 pm and 7 pm.


In response to many requests over the years for more art at the York Theatre, we are beginning special screenings on the second Wednesday of every month. Join us at the York Theatre for the Art @ York presentation of Exit Through the Gift Shop shown on Wednesday, July 8th at 1:00 & 7:00 PM. General Admission. Come early for preshow entertainment at 12:30 PM on our baby Barton Theatre organ with Dave Rhodes, Tivoli Theatre house organist.

We need your help to make this successful by emailing, blogging and telling your friends to join us for these special films.

The York Theatre has an organ, but we've only seen it played on rare occasions, but it sounds like they're stepping up their game by bringing in the house organist from the Tivoli out in Downers Grove for this event.  Pretty nice!

I've emailed my film-loving brother-in-law and asked him if he'd be willing to come out and see the show with us.  Wednesday at 1 pm is all-but-impossible...what with the whole having to work bit, but 7 pm seems like it would work.  (You'll note that in the listing on their site, the fine folks at the York are asking people to 'emailing, blogging and telling your friends').  Well...consider this checking all three of those boxes!

The York Theatre is the real beating heart of the Elmhurst City Centre and makes our downtown the vibrant place it is on the evenings/weekends and I'm proud to support them by going to the movies as often as we can (and with three kids, it is hard!).  It is also really great to see the York and Classic Cinemas invest in this type of programming.  They're flat-out stating that this type of programming was requested by the community and it is great to see them stepping up and offering art films.

They've gone a step further and are taking direct feedback and have formed an 'art advisory panel' to assist with the selection of the movies and what they say will be 'future guest lectures'.   If you have ideas or feedback, you can drop them in the inbox of the fine folks at the York here:  sjohnson (at) classiccinemas (dot) com.

As for the film, 'Exit through the Gift Shop' was released back in 2010 and it has a 96% on Rotten Tomatoes where they bill it as:


"An amusing, engrossing look at underground art, Exit Through the Gift Shop entertains as it deflates the myths and hype surrounding its subjects."