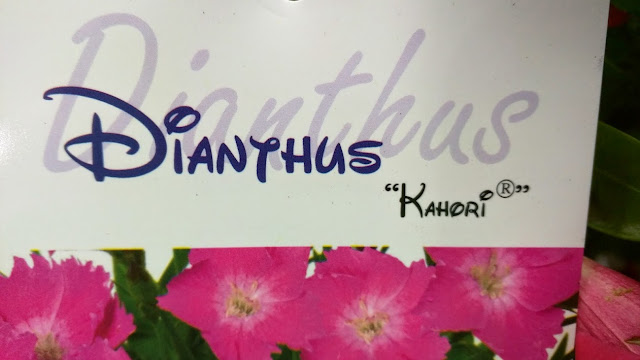 Found this label for this plant "Dianthus Kahori" on a perennial at Costco recently.  That font!

Had to snap a photo and then try to do some research to figure out if the plant had *any* connection to Disney and/or the parks.  Alas...it doesn't appear to be anything other than a lazy designer passing off the Disney font to the guys at the nursery who raised these plants.

I could actually see this becoming an extension for Disney products/consumer products some day, right?  Imagine having some sort of uniquely-bred set of perennials that they plant in the park and they highlight in some way.  Could be at the Flower and Garden show.  Could be throughout the year.
They could license their name to some nurseries to grow them that particular plant and get it to the market at scale through places like Home Depot.  I'd buy a 'piece of Disney World's' flowers for a small price.  I'd probably buy a few of them!  Wouldn't you?
2015 resolution costco disney everygoddamdamnday landscape plants