Giving Serranos A Try (Giardiniera, Anyone?) 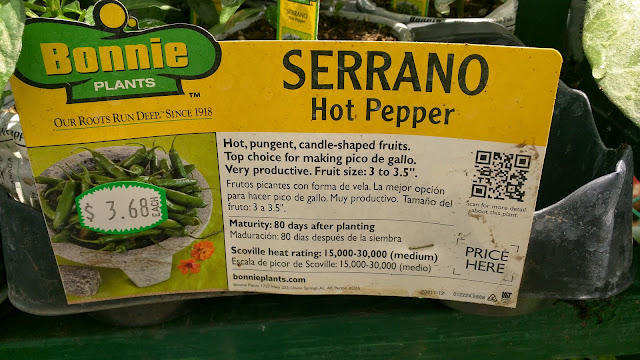 In lieu of the typical under-performing bell peppers that I plant in the garden, this year, I picked up a Serrano hot pepper plant from Bonnie Plants at the ole' Home Depot.  As you can see from the photo, serranos are described as: 'Hot, pungent, candle-shaped fruits.  Top choice for making pico de gallo.  Very productive."

While that's well and good, I'm only interested in them for one reason: The possibility of making my own giardiniera. I've tried making it in the past and most recipes call for fresh vegetables/peppers including serranos, but the output wasn't quite right.  Comparing those results (which included bright colors) with the typical store-bought jar of giardiniera (which has far more muted colors) was a disappointment.  It seems that the professional-made stuff pickles their peppers before putting them in the jar with oil?

Just compare how the 'homemade' version looks in this photo compared to what the stuff in the jar looks like in this photo.  The greens are darker.  The reds are more subdued.  How are they accomplishing that?  I suspect it is a 'pre-pickling' process that includes a much longer pepper pickle time?  Anyone have ideas?