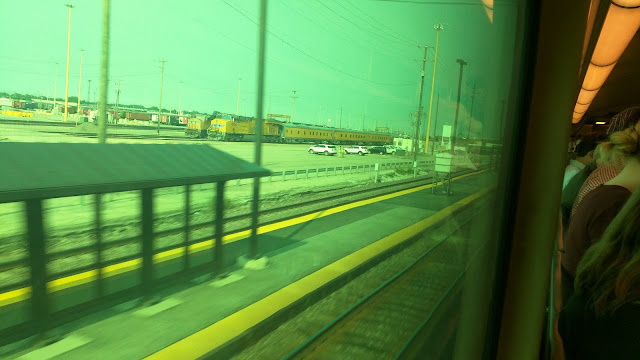 I tried to whip out my phone as fast as I could to try to snap a photo of these beautiful yellow and red Union Pacific passenger cars.  Those are them in the middle of the photo just behind the locomotive.  If you want to see them closer, click on the photo and I *think* a larger version will show up so you can zoom in a bit.

These were in Berkeley and were sitting there north of the commuter tracks.  I haven't seen them before nor since, so it was a nice little treat to see!

Based on snooping around the UP site, it appears that these might be part of the historical equipment program and based out of Lake Bluff.  There's a set of sleeper cars based there.


No other railroad in this country has retained its historical equipment and honored its past like the Union Pacific. The preservation of its fleet speaks to the high value UP places on its heritage and its role in America's history. The fleet itself dates back to 1912, but most of the passenger cars are closer to a half-century old - built during the height of passenger train travel. Each car is unique and chronicles a different chapter of Union Pacific's past.