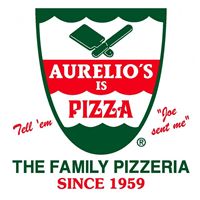 Whaaaatttt what!?!  After poking around on the PizzaMaking.com forums, I just learned that Aurelio's (My pizza touch-stone) is now selling their sausage retail.  I went looking for more details and found this story from a few years ago that shows where they're selling it:

A few of those places (Walt's and Berkots) are right by my folks' place.

If they're still selling this stuff, I'm going to have to have my Mom and Dad 'mule' me up some of these sausages.

I've decided to try to take on an Aurelio's clone and removing one of the variables (the meat) makes things a bit easier.  Still have to get the right pans (cutter pans) and work on the dough formulation, but Fall is coming soon and that means one thing in our house:  pizza-making season!
2015 resolution everygoddamdamnday italian sausage pizza pizza making pizza-spiration restaurants sausages