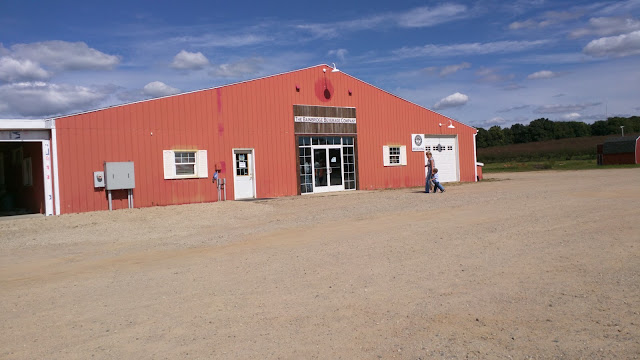 If you click on the photo of the building above you'll see the new sign above the door of this place that is *now* called "The Bainbridge Beverage Company".   You'll also notice the big dark(er) red Circle above the door that *used* to have the Grandpa's Cider Mill Logo.  You can see the circle Grandpa's logo here on their site.

I covered Grandpa's Cider Mill before here on the blog, but we made a stop there yesterday when we were up in Coloma.  The Babe spoke up and said that she wanted to go to the 'Apple Cider Bar' where you can taste different flavors of cider.  We've done that trip a few times and always had a good time sidle'ing up to the bar where we can grab some stools and enjoy the experience.

But...with the new name change to Bainbridge, it appears that they've expanded the bottling facility and moved the bar to a new location.  They've appeared to make this a much more professional facility with a lot of machinery and a bottling line.  While we were there, they were running watermelon water, which was interesting.  But, now the bar is smaller.  There are no stools.  And the whole thing felt rushed.  There's no lingering anymore where the kids were pressing their faces against the glass as the cider was getting pressed.  Now, we're sequestered to a small area where the bar is the only option.  While we were there, it was busy, and they appeared to be understaffed.  I don't blame them, but the experience isn't what it once was it seems.

And that, appears, to be a calculated choice.  While we were there, we were told that the watermelon water that they were bottling was destined for Whole Foods.  Great news for this little outfit.  So, in the interest of growing their business and likely doing with is right and maximizing the profits and reach of their offerings, it appears that the in-person bar set up has suffered.  Listen, businesses that are scale-ing need to make choices.  That's fine.  And likely the right choice.

I just don't know if we'll keep going back to Grandpa's Cider Mill in the future.  We'll give it one more shot either later this fall or next year and see if things have been righted.  If not, maybe we'll see their bottles on the shelfs of Whole Foods and reminisce about what 'once was' at Grandpa's Cider Mill errrr....The Bainbridge Beverage Company.
2015 resolution apples cider coloma everygoddamdamnday michigan small business smb