View From The New Wrigley Bleachers 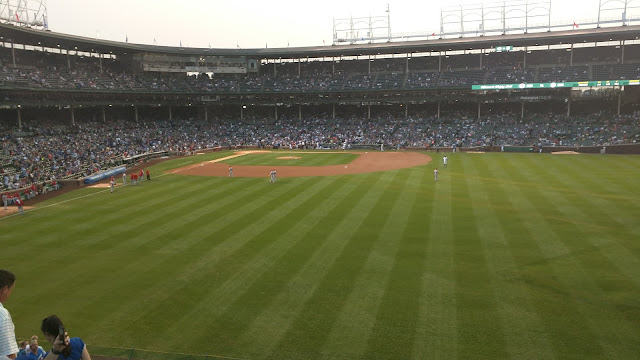 I went to the dump that is known as Wrigley Field last night with some good friends.  I think this was the second time I've been in the bleachers, but I can't totally recall.  Have to admit...it was pretty fun.
Couldn't pay much attention to the game (which kinda explains why the Bleachers are such a party normally, right?), but I did 'hoss down an absolutely delicious Hot Doug's polish sausage called the 'Carmen Fanzone'.  I wasn't ever able to get to Hot Doug's before they closed, so this was a really nice treat!

The Tribune describes the sausages thusly:

The improvements they've made to the park are quite dramatic and really quite tasteful.  All the advertising that is now present in the park is mono-color (white letters/branding) and the bleachers have a lot of room to roam.   Nat wants to take the kids to Wrigley, and I'll likely have to cave and saddle the kids up and drive to the mess that is Lakeview on a Cubs game day.
2015 resolution baseball cubs everygoddamdamnday sausages Sports