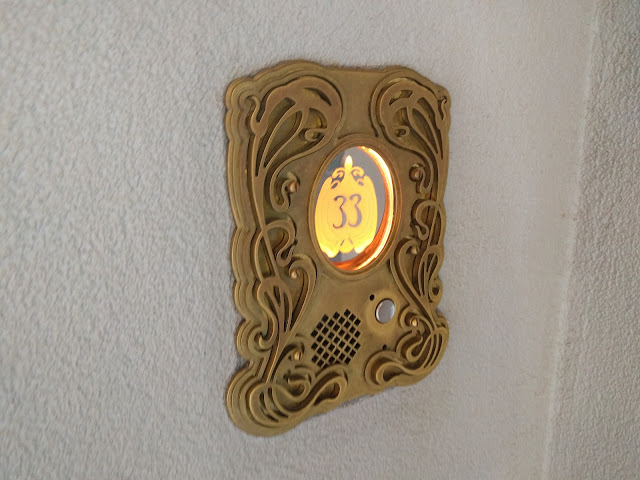 When we were at Disneyland, we made a stop in for lunch at one of the restaurants in New Orleans Square.  While waiting for our table, Nat and I took turns going to the bathroom while the other watched the kids.  Nat went first and when she came back, she pointed out that the infamous Club 33 door was on the way between where we were sitting and the bathrooms.  Of course, I had to investigate.

Turns out, there isn't much there.  Just this ornate doorbell/intercom with the number '33' on it.  The story of the Club is of course, interesting.  And, while everyone's imagination goes wild all around the Disney Parks, this secret place that so few get to go ilicits so much ooo-ing-and-ahh-ing from the savvy Disney park visitor.  For everyone else...they probably walk by the non-descript door and not think twice about the shrimp cocktails and manhattans that are being consumed upstairs will the great unwashed devours our Monte Cristo sandwiches at the New Orleans Cafe.  Hey...I'm not complaining!  I just wish they'd tell you that the Monte Cristo can feed at least two!

Also...confirmed that this place is NOW on my bucket list.  Some folks want to see the Masters at Augusta (and so do I!), but an invite to Club 33 is #1 on my list now.

And if you have a moment, scroll through all the photos at the unofficial Club 33 site here.  They have them broken down by area/room in the club.
2016 resolution disney Disneyland travel vacation