Posted by Jake Parrillo on February 18, 2016
In marking the 12th anniversary of the blog earlier this week, I thought it would be interesting to (at least interesting to me!) document the 'look/feel' of the blog over the years.  Here's some screenshots that I've collected starting with today and going backwards.

February of 2016.  Orange and blue.  Responsive blog with two columns.  Right rail for widgets/gadgets and a family photo of the five of us in the top right: 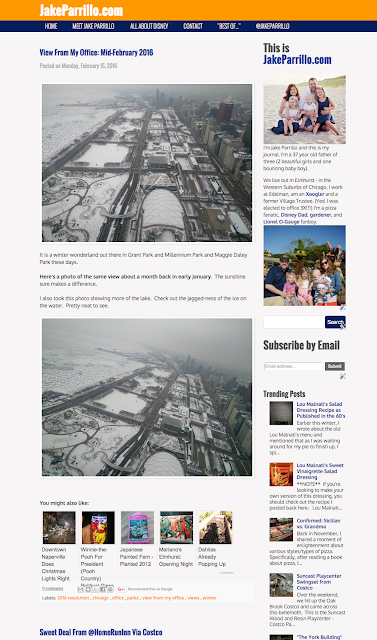 May of 2013.  Orange and blue with a cursive domain name.  Argyle in the background in orange.  Two columns with a different mobile version.  Right rail with gadgets/widgets.  And a family photo of just the four of us.  "Why I oughta" dumped from header: 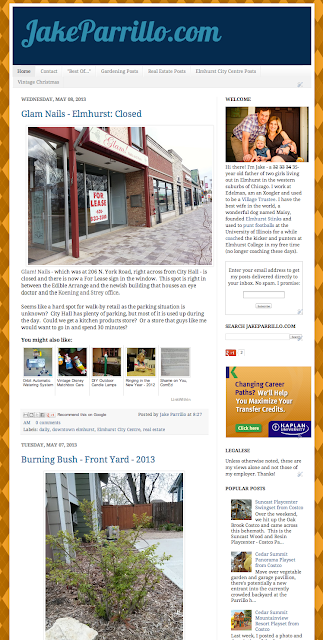 March of 2011.  This is what the blog looked like on a Moto Xoom Tablet.  Remember those?!?  It was a maroon and grey layout with a right rail.  Still called "Why I Oughta..."  Photo on the right was just me and The Babe.: 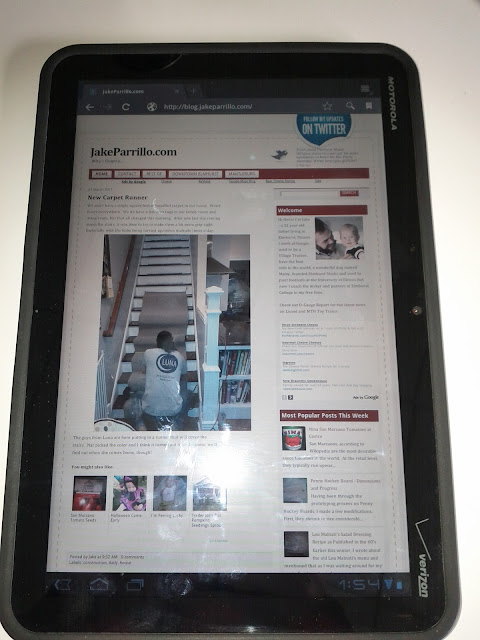 February of 2010.  A lot of white with some red/maroon.  Now called "Why I oughta".  Right rail with just a little Babe in the photo.  I also think this might be when the site moved to blog.jakeparrillo.com.  If not before: 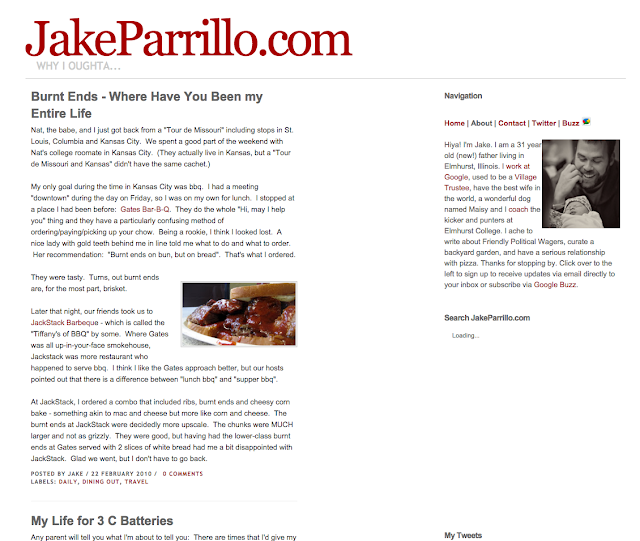 May of 2008.  Orange and grey with argyle.  Still called RhodesSchool and was likely at that url.  Had a very professional headshot on the right side.  I was still an elected official and had about a year at Google under my belt: 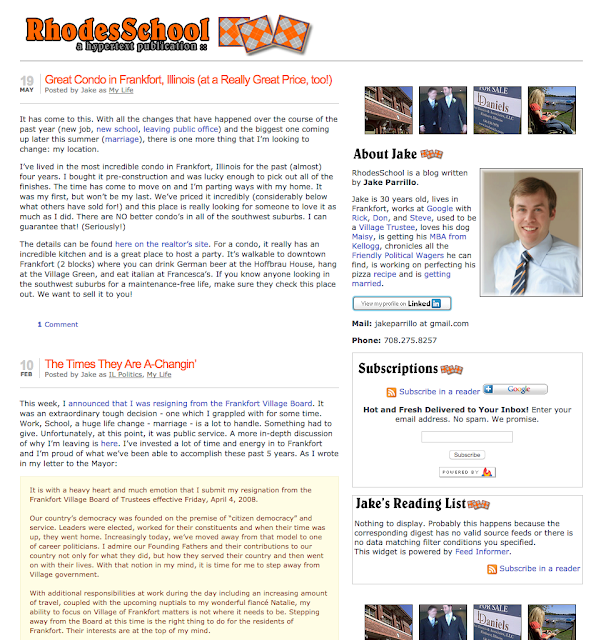 April of 2006.  These were the days of the rotating header image.  Still two columns, but I was REALLY pushing the feed widgets on the right side, eh?  Likely at RhodesSchool.com.  Also...'bar' photo on the right.  : 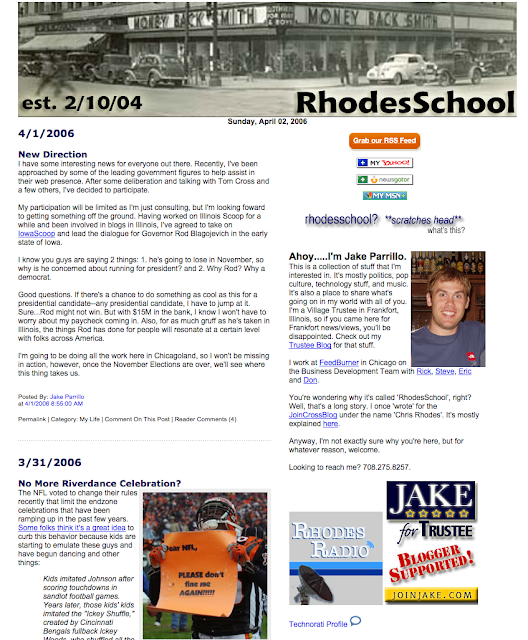 December of 2005.  The start of the rotating header photos.  Feeds present on the right along with the 'bar' photo of just me.  Based on the copy on the right, I had just broken away from the JoinTomCross blog but kept the name RhodesSchool.  Was likely at RhodesSchool.com: 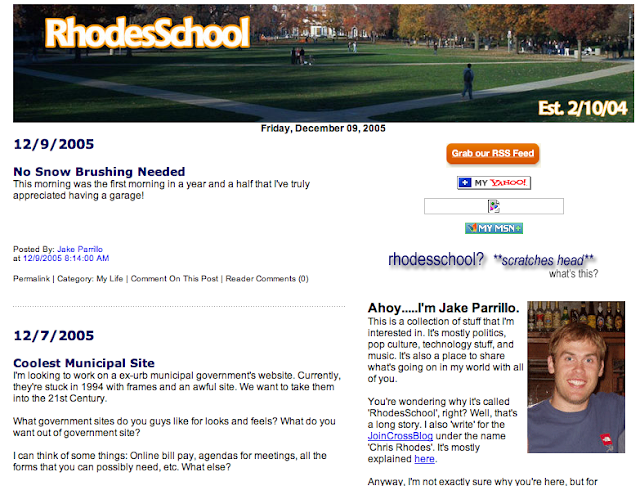 January of 2005.  This is what JakeParrillo.com looked like.  I was a Village Trustee and my buddy Jim Pyfer helped build this site.  It was, surprisingly responsive back then and had a lot of blue/gold from my logo throughout: 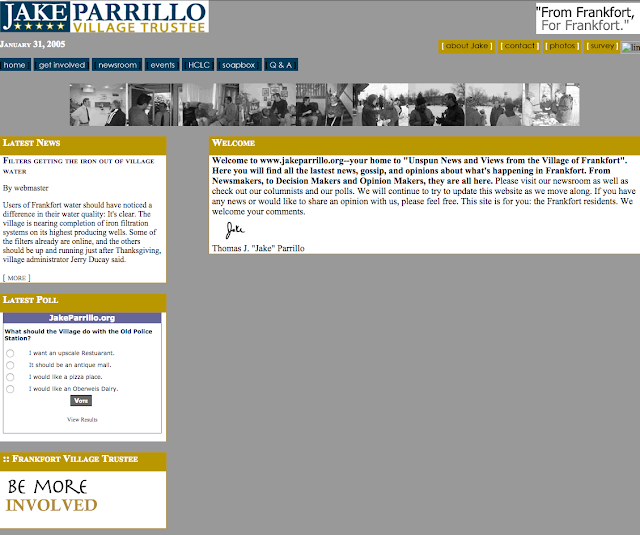 December of 2004 (RhodesSchool):   Two column, but rail on the left side back then.  I'm thinking this was probably right after the split from the JoinTomCross blog.  The header image was rotating, but in the transfer to RhodesSchool to JakeParrillo something got lost.  Consider this basically the OG blog.  Look at that blog roll on the left?!?!  This shows archives back to the earliest days. 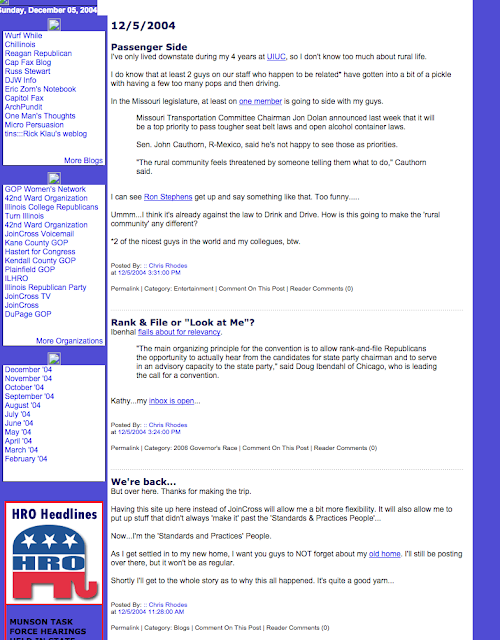