"The York Building" In The Elmhurst City Centre 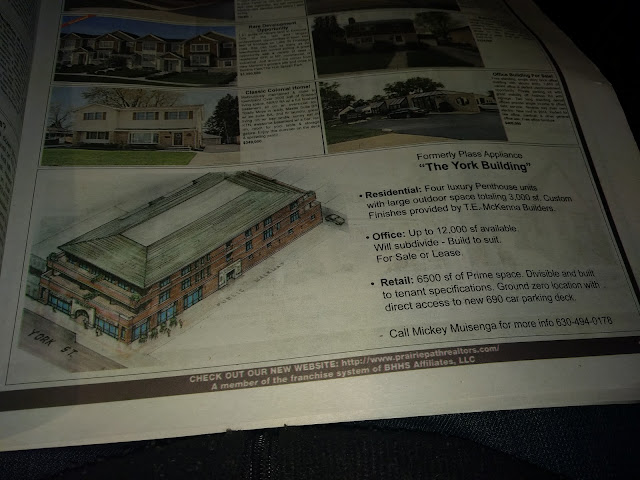 I posted a few days ago about the a 5 unit retail plaza being marketed on North York Road, but during that same session in Roberto's where I was thumbing through the local rag, I also found this ad for "The York Building".

Back last August, I posted about the new building that was being advertised in the windows of the old Plass Appliance building here on the blog.  And then just last month, I took a photo of the Plass building being torn down/apart.  Right now, it is just a big hole in the ground with rubble on the site.

But, this ad sheds a lot of light on what is to come.  Namely...residential, office and retail.

First, the residential:  They're only going to be building 4 units.  All of them are basically penthouses and will be 3000 square feet.  They'll all have 'large outdoor space', which from the look of the rendering will be terraces of some sort.  Those are some big condos, right?  3000 square feet? Luxury living!

They're also putting up 12,000 square feet of office.  That's the same size as the residential space (3k x 4), so that looks to be on the second floor.