Boarded Up: Corner of York and 1st Street 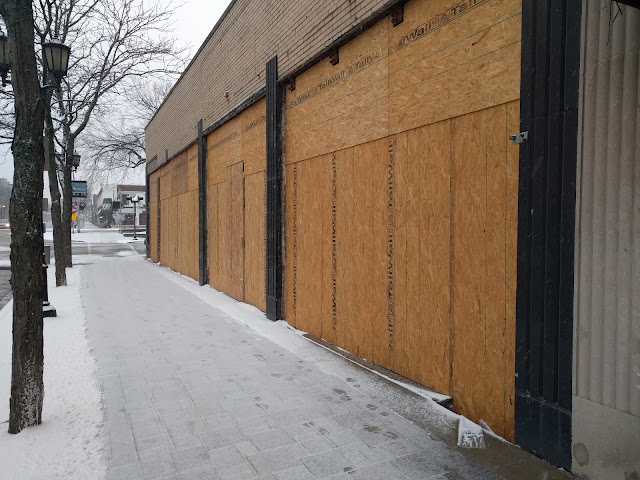 If you walk down York Street by the train tracks today in the Elmhurst City Centre, this is what you'll see:  a boarded up building on the west side.

There's a transformation of sorts taking place there.  Check out this post that shows how they're creating a unified exterior over those 3/4 previous store fronts.    What was once a combination of a super-weird nail salon, Meeder Industries, Polay's Interiors and a kid's clothing store is now going to be just two spaces:  Suite 100 and 101.

Last I heard, there were rumors of a Rosebud restaurant coming to the space.  Have no idea if that is real or not.  They have an outpost in Naperville's downtown, so it isn't totally unrealistic to think that they'd come to Elmhurst.  We do, however, have A LOT of Italian places up and down the restaurant spectrum.  From full-service/higher end places like Pazzi di Pizza and Francesca's to fast casual places like Mimmo's and dozens of pizza joints from Roberto's to Armand's to MOD Pizza on St. Charles.

With the free market, we can't *pick* what we want in our City Centre, but I know that we need a strong balance of services (offices/salons), coupled with restaurants and.....retail.  Yes....retail.  For the foot traffic, but also for the sales tax.  So, if this is indeed going to be two spaces for lease, let's hope that if one becomes a restaurant.  The other will go retail.
2016 resolution city of elmhurst downtown elmhurst elmhurst city center Elmhurst City Centre real estate real estate. elmhurst restaurants york street