#TBT Downtown Elmhurst In The Spring of 1975 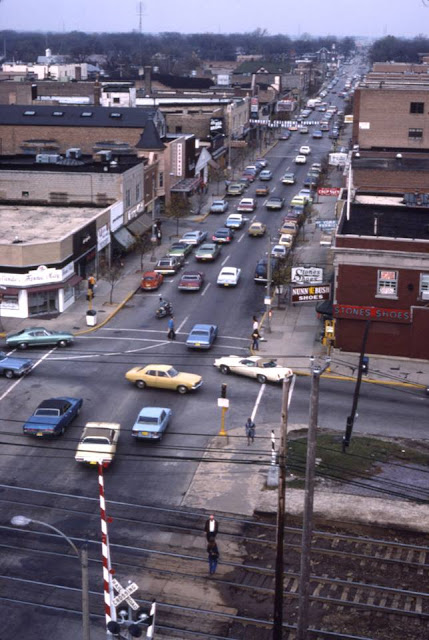 From the Elmhurst History Museum Facebook Page comes this photo above of the Elmhurst City Centre in the early spring of 1975.  Besides the cars, there's a bunch of details that come to life when you look closely.  First...there appears to be a signal just north of the tracks.  See those three cars sitting north of the Union Pacific West train tracks while the yellow car crosses First Street?  That just feels like an accident waiting to happen.   Also, see the lack of gates/crossing gates on the north side of the tracks and by the sidewalks?  'Just go ahead...walk across!'

On the right looks to be Stones Shoes where you could buy 'Nunn Bush Shoes' where the LW Reedy Real Estate office is on the corner.  And two signs north, the red sign on the east side of York Street reads "Chop Suey" where I think the York Furrier location is today.

Also, check out the banner hanging across the street up where the Plass Appliance building is (was!) today.  Kind of nice, right?  Old-fashioned way to spread the messages - be they holiday or event-based.  Today, that banner-type of idea lives on the underpass bridge on Palmer, I guess.  But, I think it would be nice to bring back a Christmas/Holiday message strung arcoss York Street, wouldn't it?

Right about where that banner connects on the East side appears to be a three story building.  That's where Fitz's Spare Keys is located today?  Or the toystore/Fitt-RX?  Wonder what happened to that building?