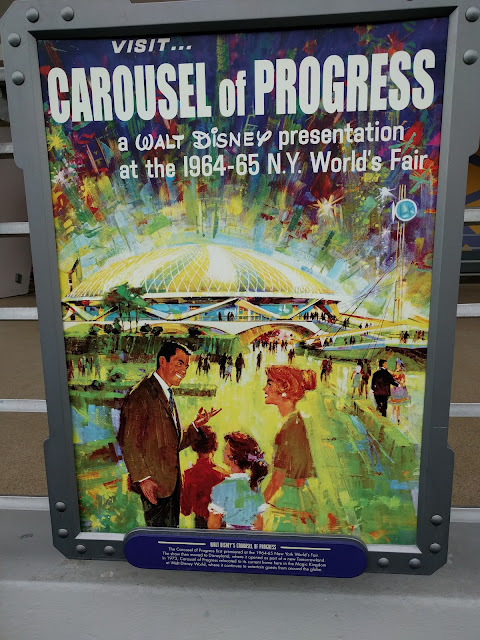 If you pause for a moment as you go under the elevated train tracks as you enter the Magic Kingdom and look to your left or right, you'll come across some vintage posters hung up that represent various rides around the parks.  This one, featuring Carousel of Progress - was one of about four that I spied on our last trip.  *This one*, however, was worth the stop and photo.  Why?  Because..."It's a great big beautiful tomorrow..."

What's that?  Oh...nothing.  Just one of my favorite experiences at the Magic Kingdom.  Sure, the last 'scene' needs updating, but with the oncoming rush of various VR headsets in the news these days, dare I say that what is old is new again?  Could they just update the clothing and claim the thing that the kid and grandma are wearing on their heads are just Virtual Reality headsets from Samsung?

The little plaque below the poster reads:


The carousel of progress first premiered at the 1964-65 New York World's Fair.  The show then moved to Disneyland, where it opened as part of a new Tomorrowland.  In 1973, Carousel of Progress relocated to its current home here in the Magic Kingdom at Walt Disney World, where it continues to entertain guests from around the globe.

I find it interesting that they don't use the word "the" in front of Carousel of Progress.  Like...saying..."In 1973, [the] Carousel of Progress relocated to its..."  Kinda like how Apple calls things iPad and iPhone.  Not...[the iPhone].
2016 resolution disney Disneyana Disneyland disneyworld theme parks walt disney