Disney Resort Hotel Bathroom Survey - What Will The Future Shower Arrangement Be At Disney Resorts?

Posted by Jake Parrillo on April 20, 2016
The folks at Disney are always conducting consumer research on a wide variety of topics.  Everything from parks experiences to transportation to hotels and amenities.  In fact, earlier this year, a big part of the online Disney community was up in arms because of a few survey questions that probed on the consumer's willingness to pay for things like in-room Wi-fi and the Disney Magic Express bus transportation from MCO to the Disney Resorts in Florida.

We stayed at the Disneyland Hotel earlier this year, but have also stayed at the Poly and Bay Lake Tower in Orlando at Walt Disney World in the past months, so I am not sure which visit this specific survey is tied to, but it focused on 'amenities'.

The survey opened with questions about how important things like coffee makers, refrigerators, a digital safe, hdtv, usb plugs, night lights, open shelving vs. drawers, etc.  They asked on a scale of 'not desirable at all' to 'extremely desirable'.  There were two things that stuck out in that group:

Could they be testing the elimination of the free little bottles of shampoo and conditioner?

The survey then turned to bed and bath sizes and configuration.  And asked preferences based on a wide variety of sizes/configurations. 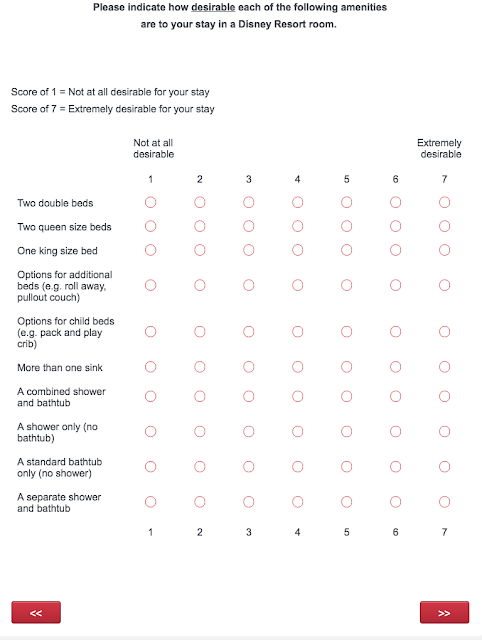 And...that's where things got interesting.  After asking a few questions about how you determine the 'cleanliness' of your room and bathroom and how often you use the shower/tub in your room, the survey turned to probing your your interest/appeal in a few *new* bathroom configurations. 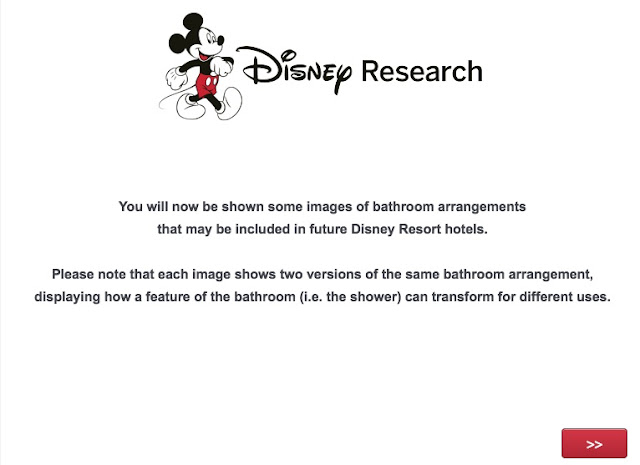 They survey started with some more - what I'd call - traditional set ups.   Some more 'spa-like' than others.  In addition to showing some bathroom setups, they also asked how appealing the arrangement is as well as how clean you would expect the arrangement to be when you arrived.  So, they're thinking about usage but also perception on how consumers are thinking about cleanliness.

Option 1 was a free-standing tub that appears to be a larger soaking tub and a bigger 'rain-style' shower head coming out of the ceiling.  No glass around the shower, but a nice set of double sinks and open shelving for towels and the robe. 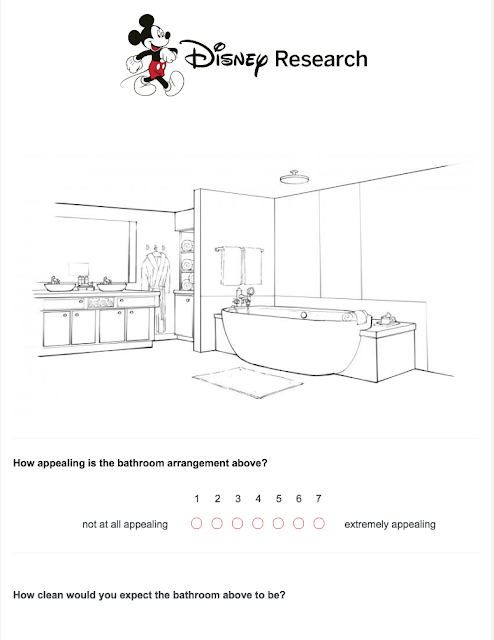 Option 2 showed what I think is a convertible tub and shower combination.  Enclosed with glass.  Based on the glass going all the way to the ceiling, I'd think this was a steam shower set up?  Otherwise everything else is the same as Option 1. 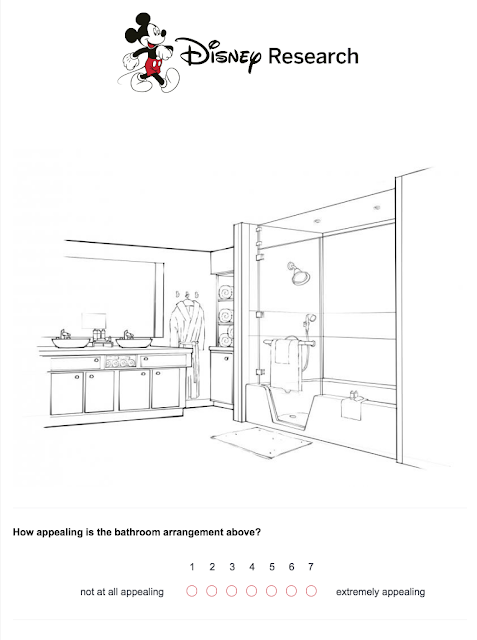 Option 3 featured a corner shower unit and no tub at all.  This one, too, had the big rain-style shower head and some other controls.  The rest of the setup was the same in regards to the vanities and shelves. 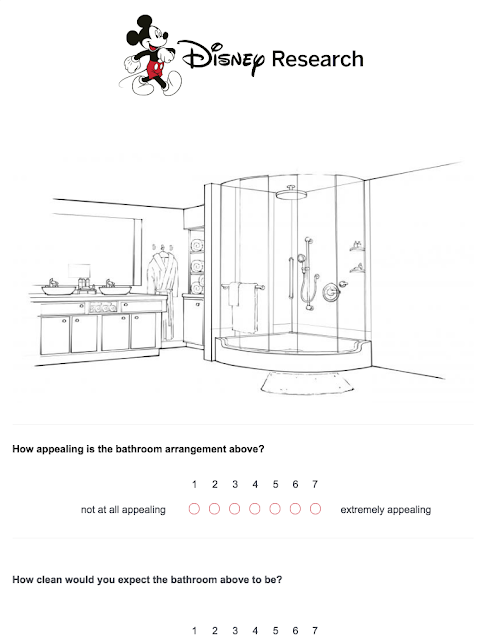 Option 4 is similar to Option 2 in that it appears to be a tub/shower combo.  This one has *some* glass and a lot of open sides.  It also appears to have some sort of 'gate' that comes up/out to make the tub an actual tub that can hold water. 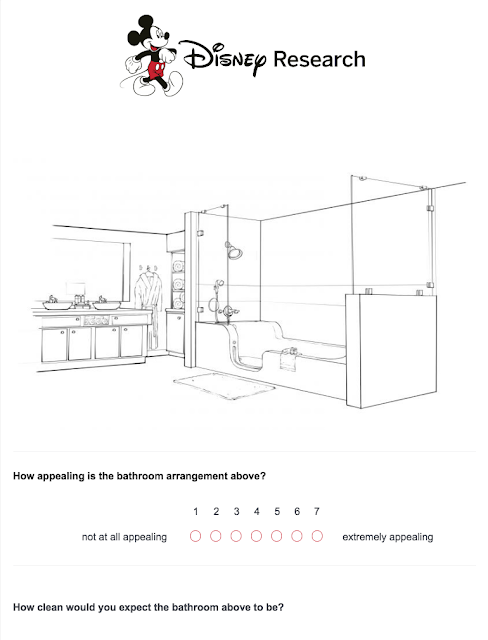 Option 5 is a total departure from the previous arrangements.  This time, Disney shows a much smaller setup (perhaps aimed at Value resorts?) that basically has the entire room wrapped on one side on two sides in glass and includes a stand-up shower as well as a toilet and what appears to be a child/baby-sized tub that when you close the lid becomes a 'seat' in the shower.

Option 6 continued down this compact path and showed how they can transform the open shower area to what they call 'a separate shower and bathing area.  I *think* that these little walls fold up to create a bathtub of sorts?

...and the last arrangement, Option 7 showed a similar transformation that includes a sliding glass shower door that converts the open shower to a closed separate shower and bathing areas.

So...what do we make of all these?

Seems like we can't say #ThanksShanghai for the bathrooms, can we?