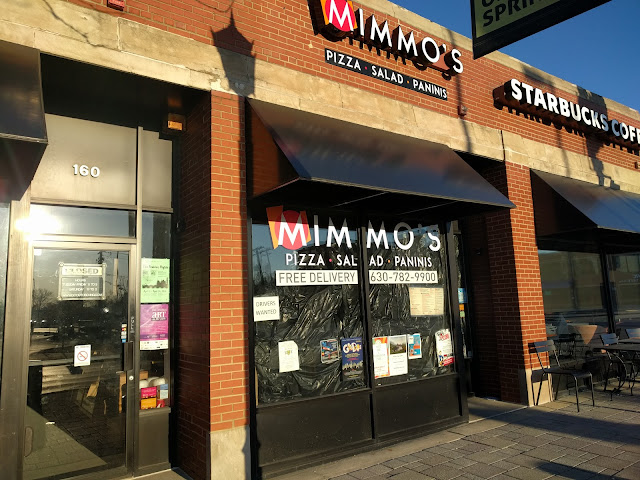 If you walk by Mimmo's pizza place on York Street in the Elmhurst City Centre today, you'll see the front window covered in black plastic wrap.  Are they closing?  It is pretty odd because they have a 'Drivers Wanted' sign still up in the window and the menu and other promotional posters all hung between the glass and the black plastic.

Anyone have the details?

(**Update on 4/19/16:  Heard from a source who is in the know that it looks like Mimmo's is being bought-out by another 'smallish family-owned pizza chain'.  So...it looks like this place will keep serving pizza and salads and such.  That's good for the City Centre.  Once it reopens, I'll be sure we give it a shot!)

I don't think it is a remodel because the place was gutted and cleaned up right before they opened not all that long ago.  Unfortunately...we've NEVER been there.  Yep...maybe that's part of the reason for the black plastic.  Blame people like us who never patronized the place.

Here's hoping that this is just temporary and that they're going to re-open soon?   If not, add this to the pile of openings like the one at 1st and York that is undergoing a total gut renovation.
2016 resolution city of elmhurst downtown elmhurst elmhurst elmhurst city center Elmhurst City Centre restaurants so long