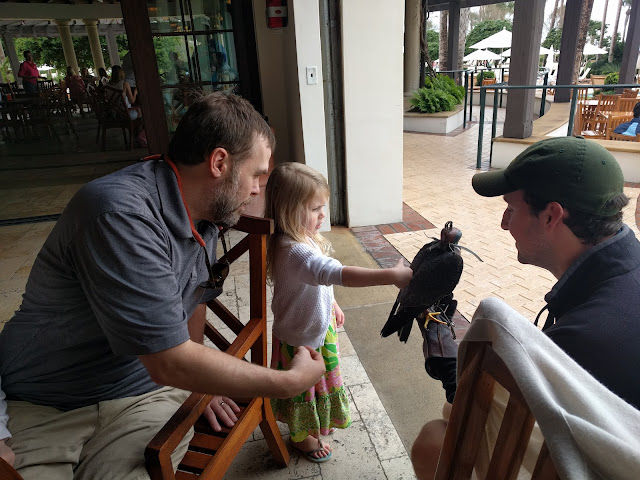 That right there in the photo is the *only* child of mine who was brave enough to go up and touch/pet this Peregrine Falcon that was on patrol at the Beach Club down at Sea Island.  The Bird - as we call her - wasn't afraid to touch this bird that is part of the falconry program at Sea Island.   Her older sister?  Not interested.

As Nat will tell you, I have a fascination with all-things birds of prey.  When we're driving, I will always point them out when they're soaring above the highway or sitting on fence posts.

Sea Island keeps their falconry program for two reasons.  The first is for hunting.  That part is something that I'm totally unfamiliar with, but it seems that you can 'hunt' for squirrels and such with these hawks.

The other way these Peregrine Falcons are used is what you see above.   They have a guy who is in their Falconry program standing watch in the pool area of the Beach Club.  After talking to him, he said that the mere presence of the falcon causes the black birds who bother guests (and eat food off of guests pool-side plates) and disturbs those birds enough that they can't get comfortable.  That means, less black birds and a better guest experience.

Pretty interesting, right?  The 'mere presence' of this bird causes the other birds to go elsewhere.