Stout Beer Tasting Over The Weekend 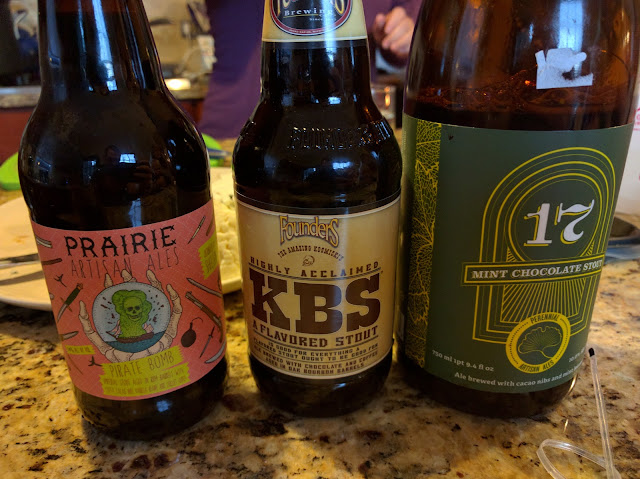 Last weekend, we had some friends over and had a little pizza party and beer tasting.  The husband of the pair, is a crazy beer guy.  I mean...like totally a beer guy.  As big of a craft beer expert as I've seen and that says something when you think about Nat's two brothers who are big craft beer guys.

Well...it turns out that Natalie likes stouts.  Me?  Not so much.  But...I'm always up for a tasting in a little glass of just about anything.  Above are three of the (I think) five or six stouts that they brought and we drank.  Did I love them?  Nah.  But they were all unique.  And all interesting.

Despite the scores, I *think* I liked the Mint Chocolate Stout from Perennial the best.  It tasted like - and smelled just like - Frango Mints, which...ain't too shabby for this Chicago-living, Marshall-Field's-going, boy.

Next time, it sounds like the beer guy is going to line up a series of 'sours'.  Hopefully pepperoni and sausage thin crust 'pair' nicely with those.
2016 resolution beer beer tastings breweries craft beer Dr. Jeff stout