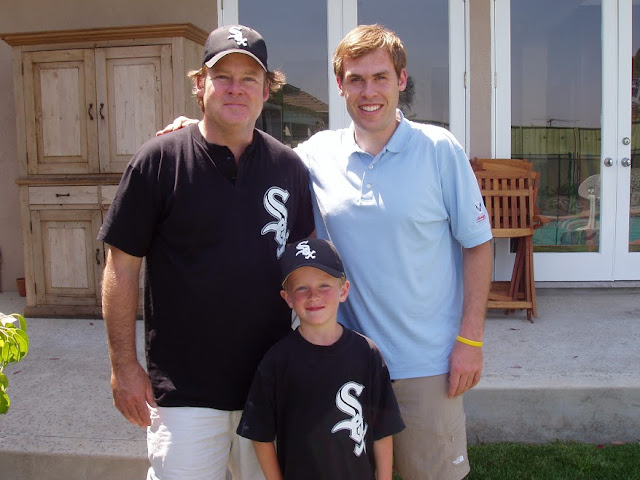 In another of the continuing series of #Throwback Thursday moments that are here courtesy of the migration of my old photos from Flickr to Google Photos, here is this photo of me and Joel Murray and one of his kids.  This is from 2004 or 2005, so it is 12 years ago.  (The date didn't stick with the Flickr download for some reason.)

Joel Murray is a working actor.  And he's a super great dude, too.  We have a relation to him through my sister and her husband.  Won't go into the whole thing, but that's how we ended up here.  Nat and I - before we had kids - stayed in the Murray's pool house for a few nights in Los Angeles.  I have a very vivid memory of this trip with Nat.  It was pretty early in our relationship and this was just.one.of.the.many.things that cemented my feelings about her and made me fall deeper in love with her.  I still remember that trip - this being one of those stops and how it fueled our relationship by building up that shared memory bank of experiences that *just* the two of us were living through.

We swam in their pool, hung with their kids, and had some laughs with Joel.  Here he is dressed up in his White Sox jersey as he was heading off to coach some little league.

You might know him as Freddy Rumsen on Mad Men.  Or from being on Mike and Molly.  Or Dharma and Greg.  Or Two and A Half Men.  Or as the voice of Don in Monsters University.  Or...perhaps as Bill Murray's brother.
#TBT 2016 resolution flickr google photos Throwback Thursday travel vacation