Posted by Jake Parrillo on May 15, 2016
Earlier this year, I came across this story in Full-Service Restaurant Magazine (yes...I occasionally read pizza trade outlets!) that spoke about how Sanfratello's was expanding in the Chicago area.  What struck me was that that this place that calls themselves the 'original Southside pizza' was crowing about how they were expanding to the 'Northside'.  The problem?  The new location is in Naperville.  Not *exactly* what I'd call the 'Northside', right?  Anyway...from the story:


Sanfratello's Pizza, Chicago's original Southside pizza since 1969, announces its first north side location. The fifth location is company-owned and is celebrating its grand opening on March 30 at 1299 S. Naper Blvd. in Naperville.

To celebrate the company's venture to the north, Sanfratello's is giving away two styles of Southside pizza—tavern style thin crust and pan. From 11 a.m. to 9 p.m. on March 30, all carryout guests will receive a free small cheese thin-crust or pan-style pizza, carryout only. Other festivities include a chance to win free pizza for a year, trivia contests, and raffles for SWAG and gift cards.

Sanfratello's is well known for its tavern-style "party cut" (square cut) pizza that originated on Chicago's south side.

"It's time to share Chicago's other pizza with Northsiders," says Joe Sanfratello, Jr, son of founder Joe Sr. "Sanfratello's is the only pizzeria that still uses the original Southside combination of Scamorza cheese, Chicago meats and a scratch-made Sicilian sauce that lets the flavor of the tomatoes shine through."

Venture to the north?  Naperville?  Seriously?  Well...let's just give them a pass until we try the actual pie, right?  Well...One night when we were out at my in-laws, my Father-in-law decided to order us a thin crust to try out.  He went to pick it up, as it is right around the corner from their place.

When he brought it home, the first thing that struck me was the box.  It isn't a regular pizza box.  If you look at the photo below, you'll see that it is trapezoidal.  The top and bottom kind of slant in. 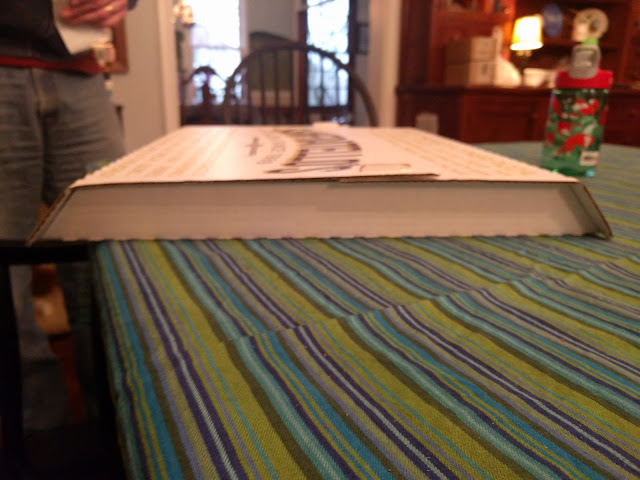 And...you open the box from the middle.  See the flap right above the logo?  Also..there's tons of copy on the box that tells the story of "Chicago's Other Pizza".  It is a super unique box and awfully interesting. 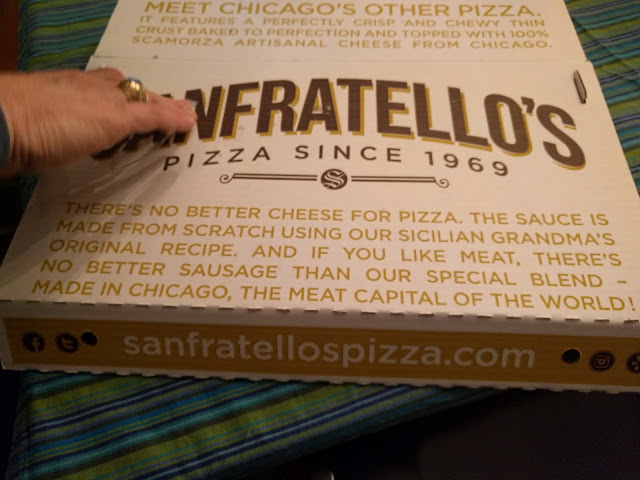 They also give you some literature about the place, the family, their process, and their ingredients.  Not sure if this was because they were just open or if this is something they'll continue to do.  As a pizza nerd, I found it pretty neat. 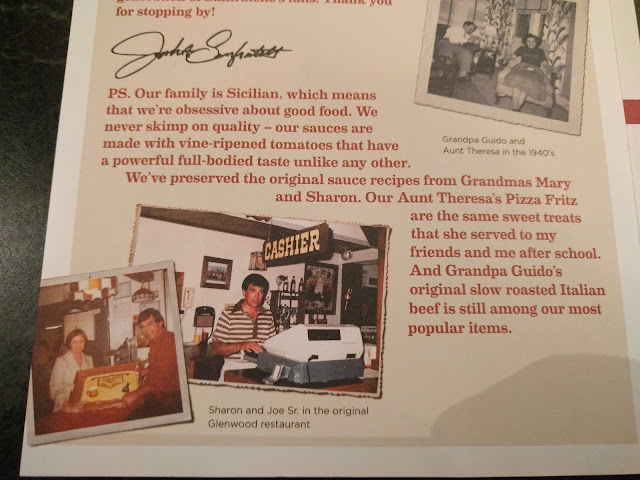 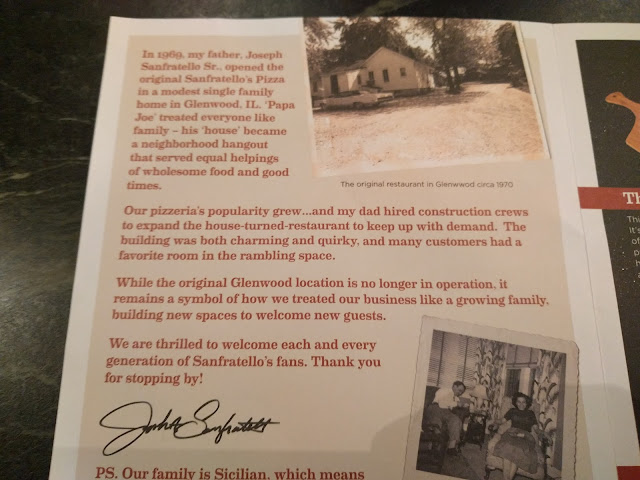 They use Scamorza cheese.  And...they call that out as a distinction for Southside pizza.  I'm guaranteeing that it is the same Scamorza that I use from Chellino in Joliet.  It is the best! 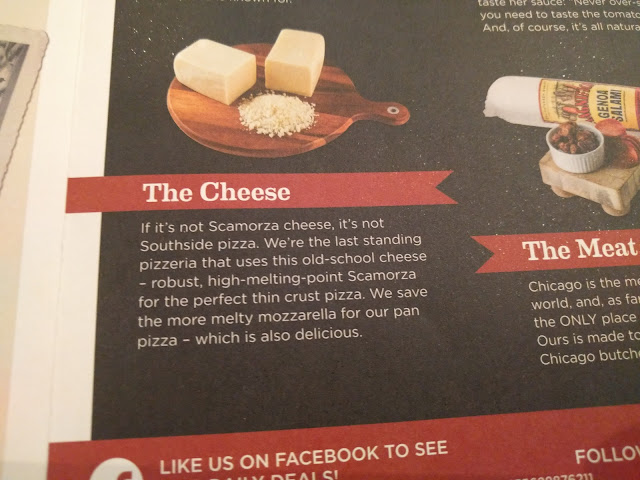 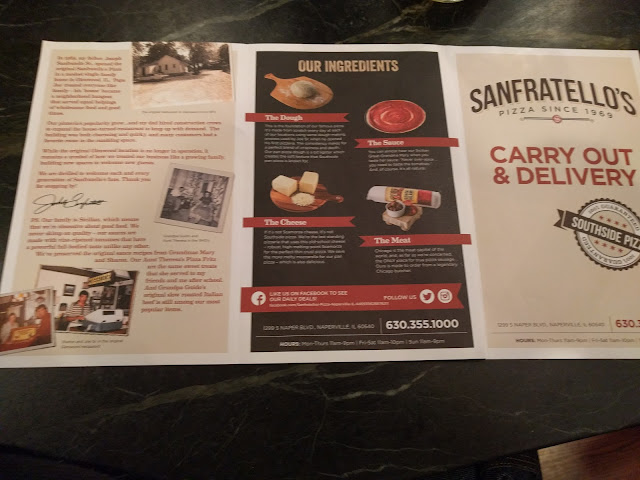 And..now, we get to the pie.  It was pretty tasty.  Not as good - for me - as Aurelio's, but that likely has to do with the Pizza Cognition Theory.    But look at that pretty upskirt.  Perfect. 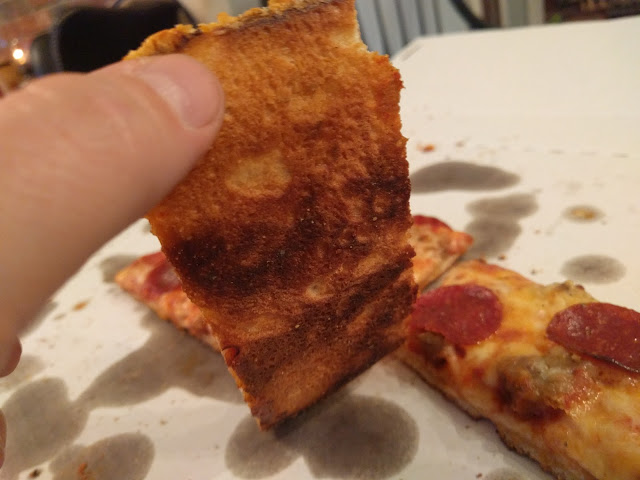 We went with my usual sausage and pepperoni combo.  They cut their squares more like rectangles, but that didn't bother me.

I'll always go Southside thin crust over deep dish, but Nat's folks love their deep dish, so it is a rare treat for me to get thin crust in Naperville.  When we do again, I'll gladly go back to Sanfratello's to give them another shot.  Still won't beat Aurelio's.  But that's ok.
2016 resolution aurelio's chicago pizza snob in-laws morans naperville pizza pizza boxes pizza gear pizza-spiration sunday dinner