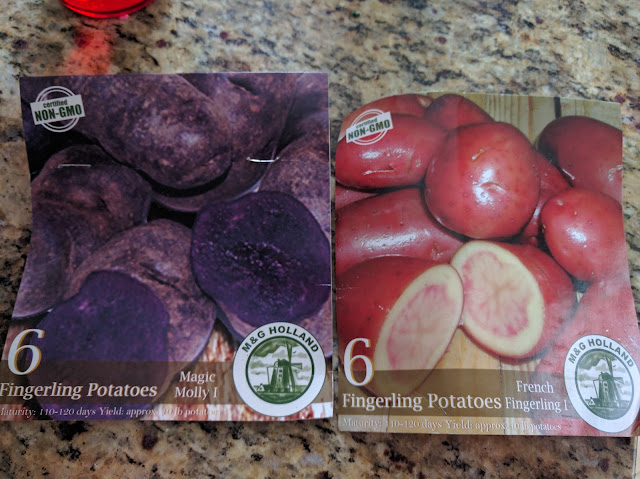 Over the weekend, me and the two girls cut up the seed potatoes that came in these two sacks:  Magic Molly I's and French Fingerling I's.  They were the two most striking varieties that Menards carries and the Magic Molly ones are particularly beautiful.  In cutting up the seed potatoes, the purple almost bled off the knife.  We're going to plant these in these new-fangled 'tubs' that Nat bought me for my birthday from Gardener's Supply earlier in April.  They're driveway-dwelling containers that are easy to move.  I don't want to crowd them out, so we might just put a few seed potatoes in each one and put the rest in my sister's garden raised beds.

The last time I posted about potatoes was back in 2013, so I'm thinking that might have been the last time we had a harvest?  I *think* I planted them last year, but we moved out before they could come in.

These fingerlings won't produce as heavily as the varieties that I've planted in years past, but I'm most excited about seeing these kinda 'exotic' versions and see how well they do.
2016 resolution garden gardening potatoes