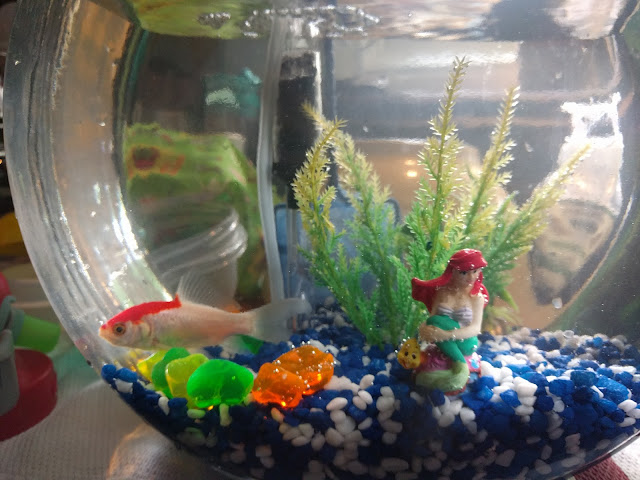 Along side Ariel and Flounder, that orange and white fish on the left is our new pet: Lucky.  Well...his name *might* be Lovie because the Savage calls her that, but everyone else calls her Lucky.  She's been living in this two gallon bowl for the past few weeks after being 'won' (can we call it that?) at the Naperville Rib Fest.

This new 'pet' has, ummmm, been a source of disagreement around the family.  I've taken on the bulk of the burden of keeping her tank clean - which hasn't been super easy - but getting her at a carnival is a sort of 'loophole' that was exploited that I don't think was appreciated by senior leadership.  Add the fact that we've been out of our temporary home for five weeks and the burden has been shared across generations.

Over the next few days, we'll transition her back to Elmhurst and if she survives the multiple water changes, the car ride and the change of locations, then she's far hardier that I expected her to be.  And...we'll be stuck with her.
2016 resolution fish tank goldfish naperville pets