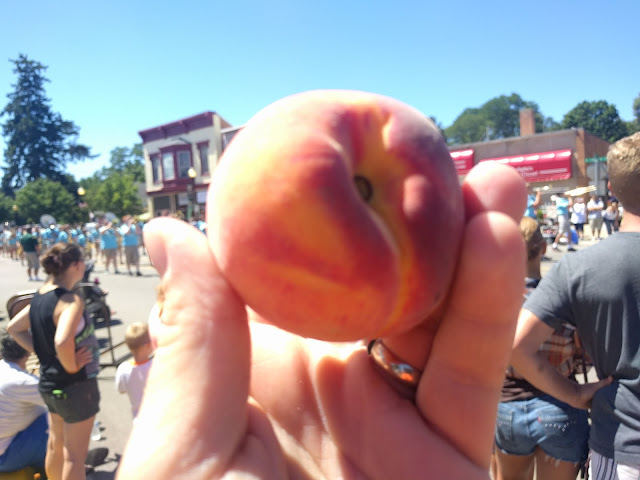 Way back at the beginning of August, we spent a weekend up in Coloma where we hit up our usual haunts like the Great Lakes Antique Mall, Silver Beach Pizza in St. Joe's and the Hilltop Harding's grocery store.

But, we also timed it right in order to be able to partake in the 2016 Glad-Peach Fest goings-on.  You know....carnival rides.  Cotton Candy.  Avoiding the expensive pay parking.  Those kind of things that every local hometown fest has going on.

I've written about the Glad-Peach Fest before on the blog.  Here's a post from the 2013 fest taken from just about the same spot as the photo above/below.

The festival celebrates both peaches (harvest time for them!) and gladiolas - the flower.  They don't do a great job of incorporating the peach theme, frankly.  And each year we're up there, both Nat and I talk about how if we had the time and were able to get involved, there'd be so much more peach-stuff.  I'm talking peach cobbler, peach ice cream, peach pie, peach soda, peach displays, peach pit sculptures, etc.

As it happened, this year, we watched the parade and ALL of the various pageant people.  Coloma's pageant is called "Miss Blossomtime" and she was up on a float.  2 floats, actually, I think.  But, during the parade, a Church group passed out peaches.  Which was nice.  I shot the photos as the local marching band went marched on by.

This is the last time we'll be up at the Glad Peach Fest, so it is kinda bittersweet.  But, who knows?  Maybe one day, our paths might cross, Glad Peach Fest?  So let's just call this 'see you later' and not quite 'good bye', mmmmkay? 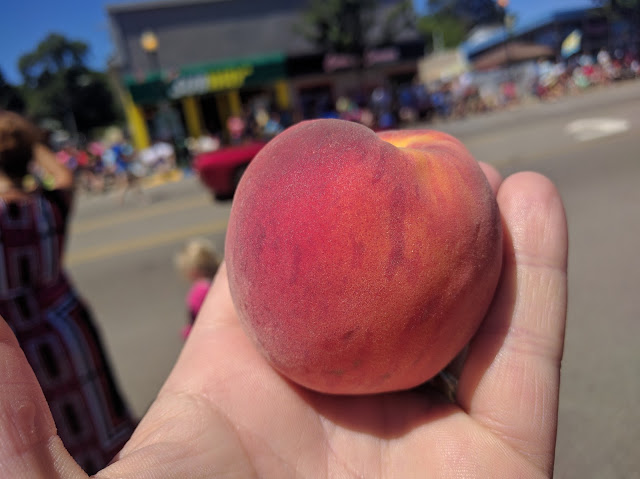