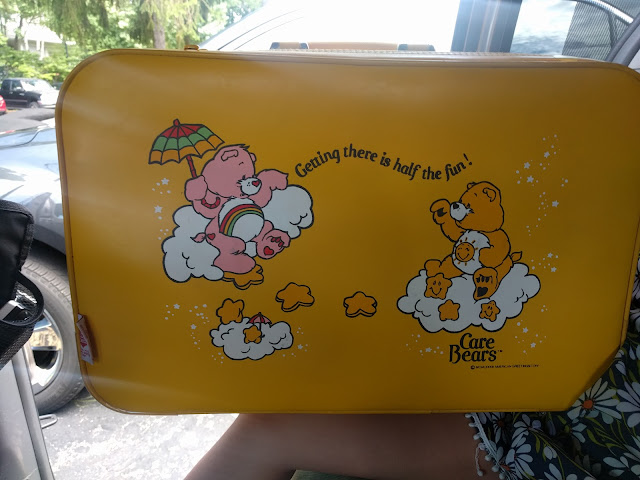 Earlier in August, we spent a few hours at Antiques on the Bluff in St. Joe's Michigan digging through the tables and piles of stuff that the vendors have hauled to the bluff.  We bought a few things for ourselves, something that is likely a gift, and this yellow Care Bears suitcase that you can see above.  It was picked out by The Babe herself and was a deal at $10.   It has a tag that says 1983 and is super clean and in just about new condition.

Nat has a soft spot in her heart for Care Bears, so we've picked up a few vintage items (glasses, books, and now this suitcase) that the girls have glommed onto.  But, I don't think they've ever watched a single episode?

The Babe is proud of her 'treasure' as she calls it and has taken to it already and is using it for her American Girl dolly clothes and gear.  So much so, in fact, that I went hunting on eBay for another one for her and another one for her younger sister.
2016 resolution antiques bluff care bears estate sale st. joe's
Location: St Joseph County, MI, USA