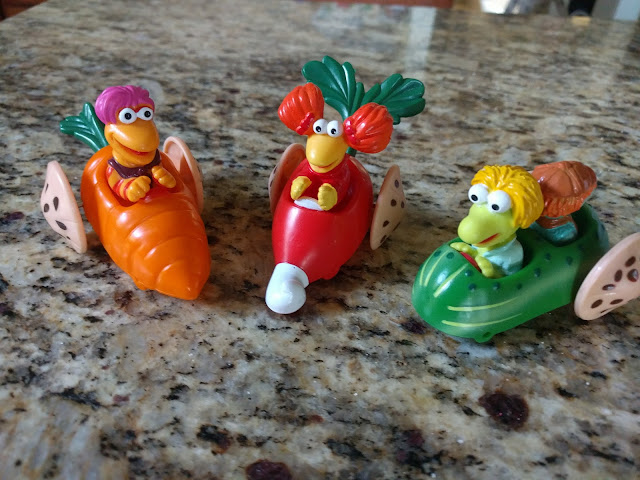 On the same trip to the Kane County Flea market where we picked up that rad Chipettes glass from Natalie's childhood, we also gave each of the girls ten bucks to buy whatever they want.  The Babe bought some dollie cloths that fit her American Girl doll, but the Bird?  She went all-in on toys.  And specifically, she dug though a few different zip lock bags of vintage fast food toys to find these three Fraggle Rock toys from McDonald's.  Turns out, after looking on the web just now, this isn't a complete set.  There was a fourth.

But we do have Gobo Fraggle in the carrot car, Red Fraggle in the radish car and Wembly Fraggle along with Boober Fraggle in the cucumber car.  We're missing Mokey Fraggle who was, apparently, in an eggplant car.  Full details of the set and even more about some special Doozer cars can be found at the Muppet Wiki site.

But, I have to tell you, that seeing her select these guys - amongst other things like My Little Ponies and Barbies and what-have-you - makes me happy that Nat has introduced and reinforced the Fraggles in our kids lives, but that wasn't the best part.

The best part?  I told her to take her bag of Fraggle toys and her money up to the guy running the booth and ask him "What's the best you can do on the Fraggles?"  And sure enough...she said just THAT.  In her awesome, child-only way and voice.  And the vendor running the booth?  I think he just about melted.  Because he negotiated against himself and kept lowering the price to make these an even better bargain.  He was a really good sport and made it fun for the Bird. She ended up having $8 left over to spend on other stuff this trip after this transaction, but she was satisfied, I think and ended up leaving with just the three Fraggles.

She was so proud - not only to have bought some toys - but also because she negotiated herself the best price!

They're already in heavy rotation with all three kids and the boy - The King of the Ball Tossers - has glommed onto them and is pushing them around the floor and kitchen table most days.
1980's dickering everygoddamdamnday Fraggle Rock haggling kane county flea market mcdonalds the bird toy cars vintage vintage toys
Location: Kane County, IL, USA