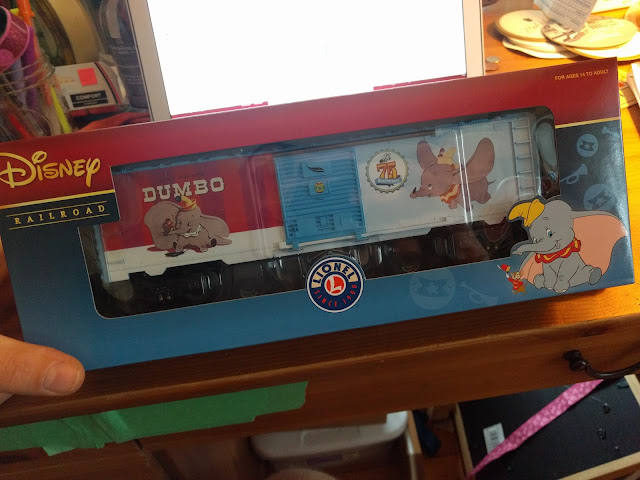 In the Venn Diagram that includes Lionel O-Gauge train stuff and Disney stuff, the overlap has been small but consistent over the years.  You can go to any train show (and...yes those things exist!) and find some vintage Mickey the Mouse cabooses and box cars from over the years.

And if we were to map people who would have an interest in that intersection, I'd gladly raise my hand.  As we've talked about before, I grew up with a Christmas Train.  My Dad would break out his vintage post-war Lionel train some time after Thanksgiving and we'd set it up.  Sometimes, around the tree, but at some point, my Mom relegated it to the basement.  That tradition - of breaking out the Lionel train set - has been one that I've tried to bring to my own kids.  And, my Dad fed the beast by giving the oldest girl - The Babe - her own set when she was 1.

So, beside last year - when we were transient during the holidays - we've set up our Holiday Train.  And we're not aiming for realism with our cars and setup.  And that's why Disney cars have some appeal.  My kids (and me, too!) love Disney, so why not bring them together.

So, this year, I was excited when I saw a handful of Disney-edition Lionel cars up for Pre-order on TrainWorld.  I pulled the trigger on two of them.  The first one that came was this Dumbo 75th Anniversary boxcar that you see above.  The box isn't the typical orange Lionel box, which is kinda nice.  The little Dumbo in the corner in cardboard is a really nice touch, too.   Here's the product listing.  From the description:


Experience the wonder of Disney with these collectable train cars. From the celebration of Dumbo 75 years later to the Disney Villains themselves, these cars will have you reminiscing about childhood imaginations brought to life. Our newest Disney train cars will have you transforming your layout from present day reality to the dreams of your youth.

As you can read, there are a few cars coming out (Villains, Pooh Bear, etc) and I *did* order each of the kids one of these various cars.  I forget which ones I ordered, but once they all arrive, it will be clear which one is for which kid/nephew.  I *know* there's a Pooh Bear one coming and that's for the Bird. But the rest?  When those arrive, I'll post them here.  For now, let's look closer at the Dumbo boxcar.  Here's the photo that is on the back of the box: 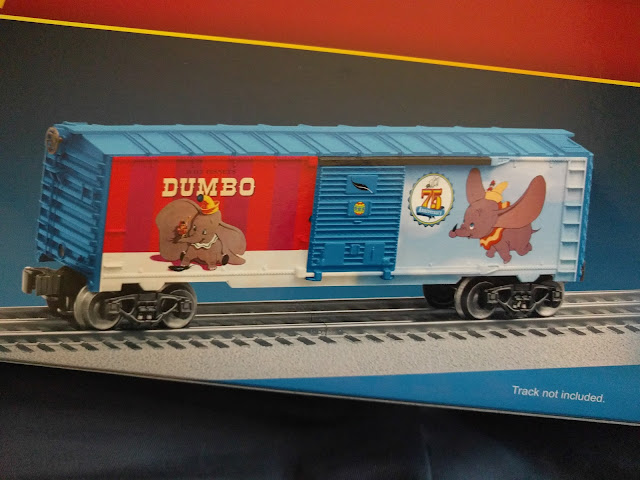 And here's the side of the box with the product description and item number. 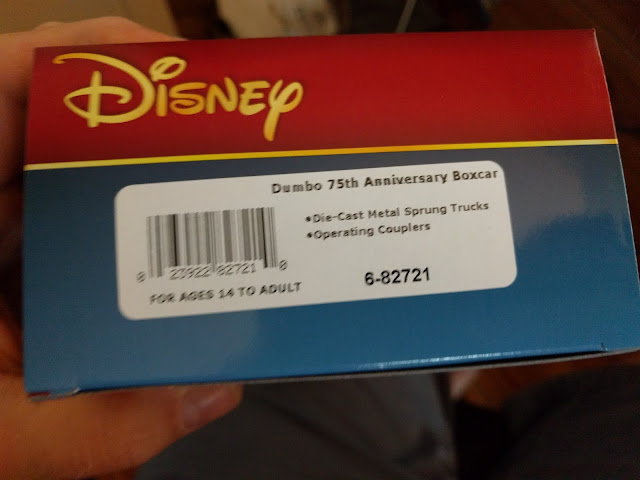