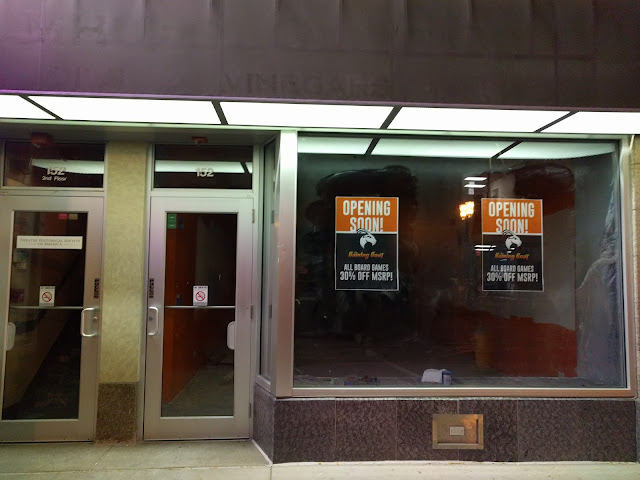 It has been almost a full year since the Elmhurst Olive Oil Company closed it's doors in the spot just north of the York Threatre in the Elmhurst City Centre.  But, if you walk past the store today, you'll see these new signs hanging up in the window that herald a new beginning:  The Gaming Goat store is coming to the City Centre.

Going back in the archives, I have this post from January of 2011 when this location hosted a recently-closed business called "Let's Have a Party".  Remember that?

But, what *is* the Gaming Goat?  I can't get to their site for some reason, but the Oak Park Store has a Facebook page and from the looks of things this isn't a video game store.  It is more of a Settlers of Catan-type of store.  Or Magic The Gathering-type of store.  Board and dice games.  The Geeks shall inherit the City Centre, it seems.

I am assuming that they're going to hustle to get the store open before the holiday shopping season and I'm glad to see more retail in the City Centre.  But, don't we have a few places that deal in this type of stuff already in the City Centre?  At Gem Comics?  Or, It's good to be King?  Maybe the audiences don't cross over that much?
2016 resolution development downtown elmhurst elmhurst city center Elmhurst City Centre real estate real estate. elmhurst retail stores
Location: Elmhurst, IL, USA