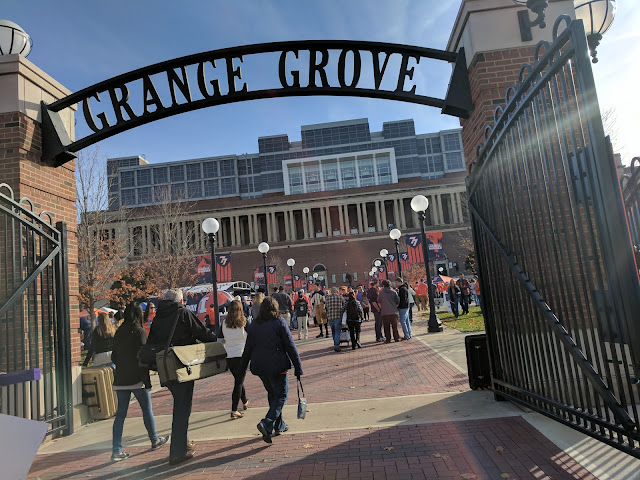 A few days ago, I posted a couple of photos from our visit to the Legacy Lounge in the Northwest corner terrace of Memorial Stadium down in Champaign that included finding one of the team photos that I was in from my days on the Fighting Illini squad in the late 90's.  But, this was our first trip down that we were able to enjoy the *kinda* new Grange Grove.

The Athletic Department christened the Grange Grove for last year's season and it has been a big hit.  From FightingIllini.com:


Grange Grove has transformed what was previously Lot 36, the parking lot directly west of Memorial Stadium, into a free, high-energy tailgating area, which Fighting Illini fans of all ages can enjoy.

When we arrived a few hours before kickoff, the place was jumping!  There was a band playing on one side and the beer garden was loaded with alums and students.  It was Dad's day, so it appeared that a few Fraternities had their "Football Block" on site in the Grange Grove and as the team continues to improve, I have to think that's going to be a great way to spend game day.  Hopefully, they'll get rid of the 11 am starts, because that's the hardest pre-game for a student to enjoy, right?

In addition to the band and beers, they also have some 'jumpy houses' that we put the kids in to burn off some energy.  But, for me, the best part is that they have a guy playing Red Grange standing in his old-timey uniform standing right by the gate to greet fans and take photos.

Really nice touch from the University of Illinois athletic department.  I hope they keep this guy around - or keep the idea of Red Grange around - for each game.  I think it works perfectly between the Red Grange Statue and the "Grange Grove".

The girls didn't really want to meet Mr. Grange, but the King of the Ball Tossers?  Welp...I kinda put him in the frame with Red and snapped some photos.  This is the Boy's first visit to an Illini game, I think?  So, I'll always remember it!  He won't.  But, he'll have this photo to check out when he's older of meeting Red Grange in the fall of 2016. 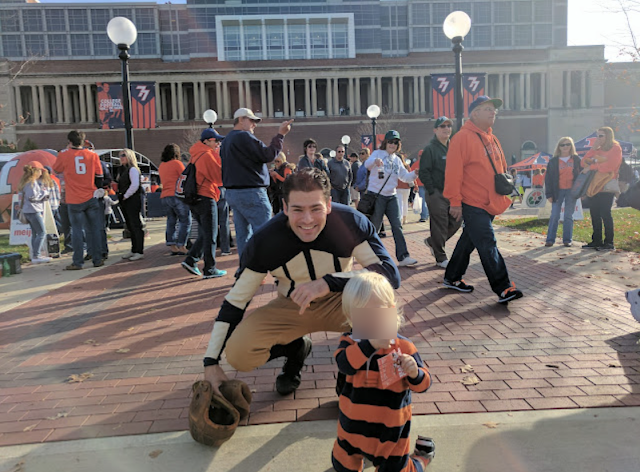